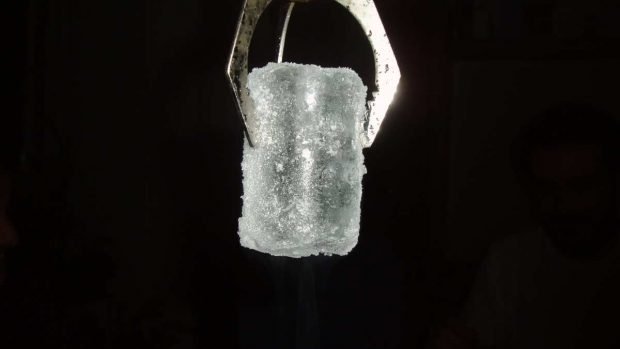 Combustible ice or flammable ice: the future of energy?

The call combustible ice or flammable ice extracted from the ocean floor can become the great power source of the future. According to the researchers, if extraction techniques are perfected, the deposits can reach up to 1,000 years of global energetic consumption. Although it seems like a new discovery, this material has been studied for decades. Which can be found in deep ocean areas or in different areas of permafrost, such as the tundra and combines water molecules and natural gas. China is one of the most advanced countries in developing the technology to extract it. The authorities recently announced a great success: the first extraction carried out in nearby waters of Hong Kong, at 1,266 meters deep. 8,350 cubic meters of this energy potential were extracted per day, for 8 days.

What is combustible ice or flammable ice?

Combustible ice or flammable ice was first discovered in the former Soviet Union in the 1960s. It is an energy source that resembles ice, its namesake, although when the temperature rises or the pressure is lowered, it decomposes into water and natural gas. It is formed by excretions of certain bacteria that live in environments as difficult to maintain as in the permafrost zone, a permanently frozen soil.

There are different types of combustible ice or flammable ice. In China they are working with methane hydrate, since it is one of the most abundant. Although it looks like ice, but when its pressure is lowered and its temperature rises, you get water or natural gas.

These structures are formed at very low temperatures and very high pressures. Under normal conditions of temperature and pressure it decomposes, releasing methane, common natural gas and water.

One cubic meter of combustible ice or flammable ice is equivalent to approximately 164 cubic meters of natural gas. So in China it is estimated that the reserves of this type of fuel can be equivalent to 80,000 tons of oil, which would be enough to supply all energy needs for two decades.

Despite its advantages as a great power source of the future, some doubts arise at the international level. This is because methane is highly explosive, so extraction can cause significant environmental risks.

The fundamental danger concerns methane escaping, which would have serious consequences for global warming, since this gas has a very strong impact on climate change, much greater than carbon dioxide.

This is something that does not agree with the opinions of Chinese researchers. Since they argue that the generation of energy from the combustion of methane hydrate produces 20% less pollutant emissions than oil and 40% less than coal, the most dominant resource in that country.