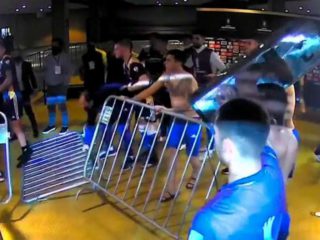 Conmebol will begin to analyze in the next few hours the incidents carried out by the Boca delegation at the Mineirao stadium in Belo Horizonte after the controversial elimination in the second round of the Copa Libertadores against Atletico Mineiro, in a game where a goal was disallowed in a controversial way.

Boca lost in the definition by penalties and in the dressing room area they strong clashes between Boca’s entourage and private security. There was also damage to the stadium. Some players threw fences and Marcos Rojo took a fire extinguisher but finally did not throw it. The riots lasted several minutes and the Brazilian police fired pepper spray.

According to the information that TN Deportivo had access to, today the Conmebol will begin to evaluate what happened in Mineirao through the reports of the officials who were on the field. A disciplinary file has not yet been opened, although it will surely be done shortly. The police report containing the charges against the members of the Boca delegation will also be taken into account and the videos from the stadium security cameras will be reviewed.

In total, there are seven members who were charged with assaults, resistance to authority and damage to the assets of the Brazilian club. The footballers mentioned in the Brazilian police document are Diego González, Marcos Rojo, Sebastián Villa, Norberto Briasco, Cristian Pavón and Carlos Zambrano.

It describes attacks on security personnel, clashes with police, disturbances in the changing room area, and breaks in the corridors of the Mineirao stadium.

According to the disciplinary regulations of Conmebol, Boca is exposed to sanctions ranging from one economic fine until disqualification from future editions of international tournaments. Also, there could be disciplinary sanctions for footballers who actively participated in the attacks, which according to the police report, were the Octopus González, Rojo, Villa, Briasco, Pavón and Zambrano.

“The incidents started because a Conmebol delegate denounced an attack and later tear gas had to be used to deter the situation ”, said the person in charge of the police operation, Santiago Mayor.

The Disciplinary Unit of Conmebol could also determine that Atlético Mineiro does not play at home in Belo Horizonte in the next match for the quarterfinals for the Libertadores against Argentinos Juniors or River.

The full video of the Mineiro-Boca incidents

It will not be just another fact. Boca will be sanctioned by Conmebol after the embarrassment that occurred in the changing room area, after the elimination against Atlético Mineiro in the Liberators cup.

Cascini a las piñas, Marcos Rojo with a fire extinguisher and tear gas after the elimination were some of the most scandalous images of the night.