Copper and iron in the brain: will they be the cause of Alzheimer’s? 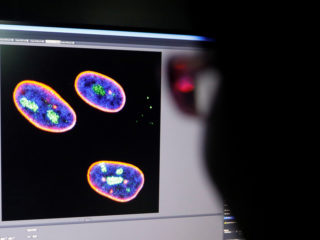 A study published this Wednesday, June 9 in the journal Science Advances, evidences the presence of tiny iron and copper deposits in the brain of two people who died after suffering from Alzheimer’s.

Scientists from the United Kingdom, Germany and the United States, authors of the research, describe their discovery as surprising and very important for the study of this disease. The find could help scientists better understand how those elemental metals contribute to neurodegenerative ailments and provide clues to an alternative treatment against them.

The experts collected brain tissue from two deceased Alzheimer’s patients and found some forms of harmful elements in amyloid plaque, a hallmark of the disease. Thus, they detected copper and iron nanoparticles that did not oxidize, nor did they gain or lose electrons.

These specialists specified that it is the first time that such nanoparticles appear in human tissues of any type, and they suggested that the minerals found could explain how Alzheimer’s disease damages cells, since their surfaces would be highly reactive.

Copper and iron are found throughout the body of healthy people, including the brain. Both minerals can be there in different oxidation states, depending on the compound in which they reside.

But while enzymes and proteins containing positively charged copper or iron ions are known to control key processes in the human brain, little is known about how that organ mineralizes them. This includes the formation of nanoparticles of these elemental metals, which are more reactive than the oxides from which they originate.

The researchers acknowledge that there is much more work to be done. Until now it has not been confirmed whether these metals appear in other Alzheimer’s patients, or if they are present in patients who may have other degenerative brain disorders.

“The unexpected identification of copper and iron within the amyloid plaques of Alzheimer’s disease suggest that biogenic metallic elements, previously observed only in microorganisms, viruses and plants, may also appear in humans, “the authors noted.