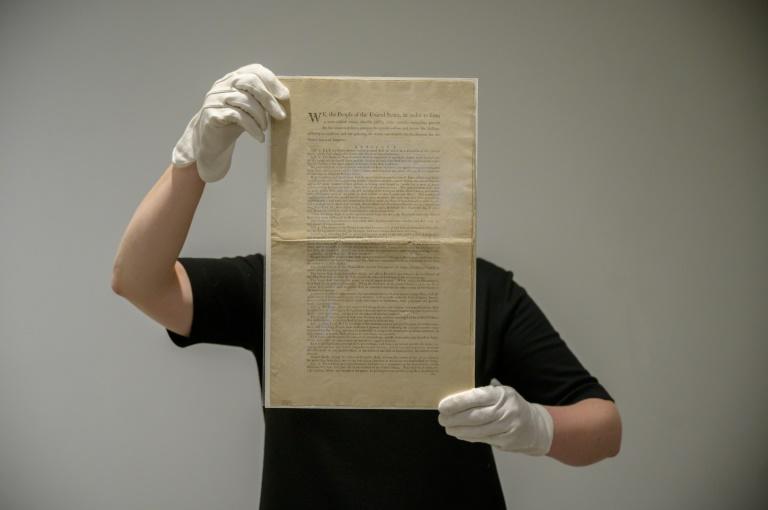 Copy of the US Constitution for sale for $ 15-20 million

A rare original of the U.S. Constitution, signed Sept. 17, 1787, in Philadelphia, will go on sale in late November for $ 15 million to $ 20 million, auction house Sotheby’s announced Friday.

The sale is scheduled to take place in New York in November.

Sotheby’s exhibits until Sunday a private collection of constitutional documents dating from the revolutionary period, between 1776 and 1789, such as the famous Constitutional Charter signed in Philadelphia by the “founding fathers” of the United States, including George Washington, Benjamin Franklin and James. Madison.

Selby Kiffer, an expert historian of manuscripts and antique books at Sotheby’s, told AFP that it was a “fantastic first (copy) printed of the United States Constitution, which was probably printed on September 16”, 1787.

It is a “very rare” document as there are only “eleven copies” left even though “five hundred” were probably printed, and only one is in private hands, Kiffer explained.

Indeed, it belongs to the American collector Dorothy Tapper Goldman.

The document, in a fairly exceptional state of preservation, is expected to remain in the United States, although it could be acquired by a foreigner.

Sotheby’s exhibits this collection of American constitutional history at times of great political polarization in America.

On Saturday there will be a demonstration in Washington DC by supporters of former US President Donald Trump in support of the Donald Trump supporters who stormed the Capitol, the seat of the US Congress, in January.