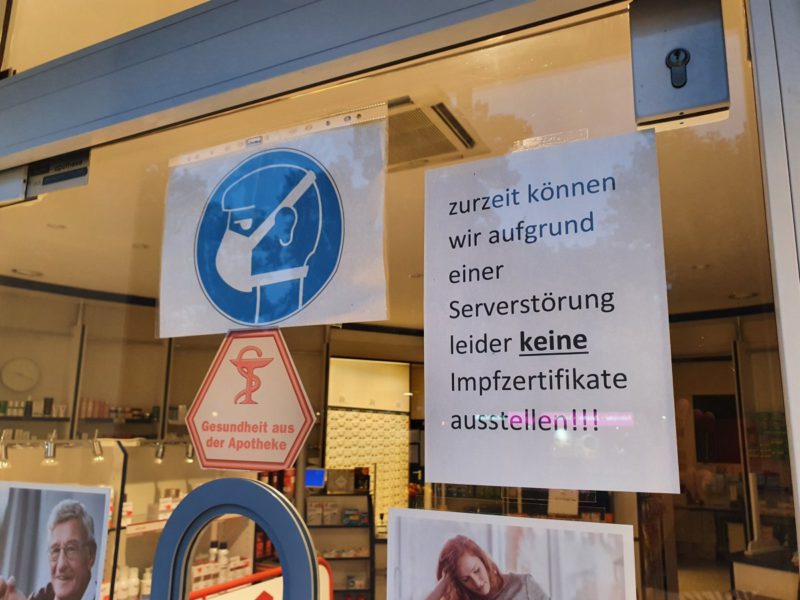 More than a week ago, the German Pharmacists Association (DAV) switched off the servers that pharmacies could use to issue digital proof of the corona vaccination. The resumption of operations announced for this week is still a long time coming.

Initially, the German Pharmacists’ Association (DAV) was confident that the portal for issuing digital vaccination certificates would go online again this week. So far, however, nothing has happened.

On the afternoon of July 21, 2021, the DAV surprisingly deactivated its server for the creation of evidence. Pharmacies only got an error message. Unfortunately, the message was worded in such a way that many branches initially assumed that they were the only ones to be locked out. The extent of the measure only became clear on Thursday.

Why the servers are down

After the DAV initially weighed it down, security researchers Martin Tschirsich and Dr. André Zilch with deliberately clumsy forgeries, with how little effort it was possible to gain access to the certificate server.

Confronted with this result, the DAV pulled the rip cord and unceremoniously blocked all access to the server. In a statement on Thursday, July 22nd, the pharmacists’ association claimed that the security researchers had gained access by stealth with “professionally forged documents” which “could only be created with fraudulent intent with considerable effort and criminal energy.”

In fact, the DAV had failed across the board in its “review” of the security specialists’ fake application: Although neither the name, address nor telematics ID were correct, the researchers were able to create a valid certificate without any problems. The devastating conclusion of the experts: “Any seventh grader would have managed that.”

Just one day later, the DAV announced in a joint statement with the Federal Ministry of Health (BMG) that the pharmacies would have access to the portal again this week.

The crux of the statement was a somewhat strangely worded passage: “All pharmacies that wish to do so will gradually have access to the DAV portal again in the next week so that they can issue vaccination certificates again.”

In addition, the “potential” security gap only affects pharmacies that are not members of the regional pharmacists’ associations. It was therefore to be expected that at least the 17,430 DAV members would have access to the portal again at the beginning of this week, the 470 registered non-members then gradually, possibly on request.

The promised reopening has not happened to this day. In response to complaints from the pharmacies that were put off, the DAV published on Wednesday a new, concise statement: If pharmacies wanted to know when the server would go online again, they should “do nothing more” and simply wait for the DAV portal to indicate that vaccination certificates can be issued again.

What vacationers can do now

Anyone who has been vaccinated in a doctor’s office can inquire about digital proof there – doctor’s offices, like the vaccination centers, are directly connected to the RKI certificate server and are therefore not affected by the DAV breakdown.

In Falkenstein, Saxony, a pharmacy seems to have helped itself: The local central pharmacy continues to issue digital certificates even after the DAV server has been switched off. An alternative access portal is also used here.

If you cannot use any of these alternatives, you currently only have one choice: to keep your yellow vaccination certificate with you.