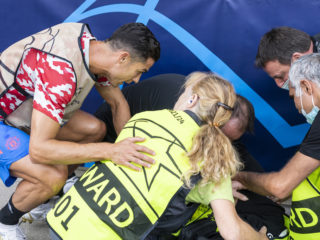 Cristiano Ronaldo was quick to help after he kicked a ball hard, accidentally hitting a member of the security team. The woman hit by the pitch collapsed on the floor shortly before Manchester United’s match against Young Boys in the Champions League, informs Sky Sport.

The Portuguese star was with his teammates at the Wankdorf stadium, in Bern (Switzerland), during the warm-up before the game began, when the incident occurred.

In the images disseminated on social networks you can see how CR7, obviously worried, leaves the field jumping a fence to get closer to the woman who was lying on her back on the ground and assess its status.

Cristiano Ronaldo knocked out a steward with his shot in training before the match.He jumped the barrier to check up on him while he received medical attention ❤️pic.twitter.com/YOBkqs3fEV

The victim remained surrounded by other colleagues from the security and technical team while fans watched the scene with interest. After confirming that he was fine, Cristiano Ronaldo returned to the field of play and was praised by those who attended the stadium.

Apparently, the incident did not affect the performance of the Portuguese star, who just 13 minutes after starting the match scored the first goal for Manchester United. This is the third goal that CR7 has scored in just two games after his return to the English club.