Crude is trading above $ 70 after two-day rally 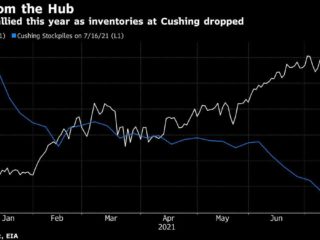 (Bloomberg) – Oil held a two-day gain above $ 70 a barrel, driven by a drop in US fuel and distillate stocks and the broader market rally.

At the start of operations in Asia, West Texas Intermediate was down 0.1% after posting an increase of more than 4% on Wednesday. Equity gains bolstered investors’ risk appetite, outweighing concerns about what impact the rapid global spread of the delta variant of the coronavirus would have on energy demand.

Crude has been on a rollercoaster this week, backing off on Monday amid concerns about the pandemic and plans by the Organization of the Petroleum Exporting Countries and its allies to increase supply. This was followed by a rebound, as the Energy Information Administration reported that oil inventories at the key storage facility in Cushing, Oklahoma, fell to the lowest level since January 2020.

The delta variant has swept through parts of Asia, prompting a series of renewed restrictions by governments to control its spread. In the southeast, Indonesia, the region’s largest economy, the government imposed a patchwork of restrictions across the sprawling country after a record number of daily deaths. In the US, Texas reported the highest number of confirmed infections in more than three months.