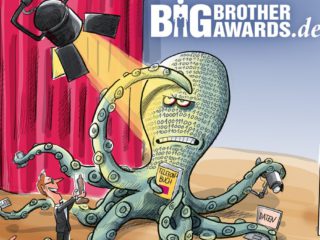 Even in a year marked by Corona, some companies and authorities have made an effort to expand surveillance technologies or stifle data protection. For this, the jury of the Big Brother Awards presented them with the coveted prizes in a small gala in Bielefeld. After a year without an audience, 50 viewers will be allowed to attend again in 2021, the rest will look into the tubes that make up the Internet. This time the gala is supposed to be interactive, because you want to include the Fediverse and Twitter with the hashtag # BBA21.

Who the gala event organized by Digitalcourage in the livestream Can’t keep track of likes to read this summary with lots of links to educate the online audience. All winners are honored, as the jurors do in Bielefeld, with one prominent exception: since the first Big Brother Awards ceremony in 2000, lawyer Rolf Gössner has been a member of the jury. For an improvised start in the basement on Ulmenwall, he awarded the Berlin Senator for the Interior Eckart Werthebach a BBA for telephone monitoring IMSI-Catcher. It’s hard to believe that this location query, now routine work in almost every TV police crime, was illegal at the time. It did not last long either and was legalized in 2003, just as the use of the state trojan was approved by the federal police and the secret services, in line with technical developments. In any case, Rolf Gössner has left the jury and will give a farewell speech in Bielefeld in which state surveillance will definitely play a role. Because Rolf Gössner was spied on and monitored by various secret services for 38 years, an inglorious record of the German services.

So to the worthy winners. Five were selected for the BBA 2021, three of which are crops from life in the midst of the corona pandemic: The years 2020/2021 have left deep traces in the so-called monitoring total bill, which is rejected by the still-in-office government. Especially in the health sector and all without the rulership and switching of Health Minister Jens Spahn. Because the French company Doctolib receives a Big Brother Award in the “Health” category for its appointment-making service for medical practices.

Doctolib has already been criticized on the rc3 of the Chaos Computer Club because hackers managed to get to the metadatras that can arise when an appointment is reserved. Doctolib’s management of video consultation hours was also criticized. However, the jurors of the Big Brother Awards saw a completely different problem: If a practice wants to use the appointment service, it has to transfer the insured person’s master data to Doctolib. The procedure is backed up by documents that delight the heart of a lawyer. There are a dozen of such documents: general conditions of use, data protection notices, principles for the protection of health data. In addition, there is a cookie policy, a processing list, further information on data protection and security and finally an order processing contract and definitions. “That is too much for a uniform service. The documents are confusing and unclear, sometimes contradicting”, explains Thilo Weichert, the former data protection officer of Schleswig-Holstein. The one he co-founded Network data protection expertise wants to publish an opinion on Doctolib, but even so it is enough for the award as “data octopus”.

What was to continue in lockdown were exams and exams in higher education. The Munich company offers them Proctorio a “fully automatic and secure exam supervisor for online exams”. According to the jury the data protection information is already problematic, but the big supervisory brother goes much further. “Only those who give Proctorio access to their video camera can take part in an online exam. This must be switched on during the entire exam time. Examiners can decide whether they want to observe students personally during the exam, or whether the software does this for them.” In addition, a room scan is used to search the surroundings to see whether prompts or prompts can be seen.

But that’s not all, because the software analyzes the eye movements, which is advertised as “face recognition”. Copy & paste is of course blocked, as is file download. After a Washington Post report on testing software the Student Council of the University of Amsterdam sued Proctorio in court because the software violated privacy. “He demanded that students had to consent to the procedure before the software could monitor their webcams and microphones. At the same time, they wanted their study time not to be extended if they refused the examination form. In mid-July 2020, the District Court in Amsterdam ruled that the University of Proctorio may continue to use – without having to obtain the consent of the students. ” No protests have come to light from German universities. After all, the company’s website names the Johann Wolfgang Gorthe University in Frankfurt / M, the medium-sized university of applied sciences and Bielefeld University as users of the examination supervision. In this respect, the Big Brother Award could not only have been given to Proctorio in the “Education” category, but also in the once very popular “Regional” category.

The award of the year 2021 in the category “Transport” has a history. It begins with data protection and the Federal Government’s request to have car consumption data measured without the vehicle identification number being recorded. The Ministry of the Environment then expressed the minimum requirement for the data to be pseudonymised. That could not be done with the EU Commission. With Fuel Consumption Monitoring, which will become binding from April 1, 2022, the vehicle identification number (VIN) of cars and vans will in future be transferred together with the fuel or electricity consumption first to the manufacturer and then to the European Environment Agency and there for 20 years (!) stored for a long time in a particularly secure central archive.

Reason enough to present the EU Commission with a Big Brother Award for the measuring and recording device, the “On-Board Fuel Consumption Meter” (OBFCM). The matter is actually simple: “As long as the engine data remains linked to the vehicle ID, extensive insights into individual driving behavior are definitely possible,” said the laudatory speech. But the thing is also funny: Because car manufacturers cheated in the past when determining the average consumption data, the transmission of the VIN should ensure that the data is unadulterated. On top of that. In his award speech, laudator Frank Rosengart mentions the Data room mobility, in which car manufacturers and mobility providers want to share their data. What is shared is very unclear. “With OBFCM” another piece of the mosaic is being laid in the direction of glass drivers, although this would not be necessary at all.

Google is honored for the second time

In addition to the conventional categories such as “Traffic” or “Education”, the Big Brother Awards 2021 have received two new, personalized categories. Under “what really makes me angry!” Rena Tangens tells about her experiences with cookie banners and trackers, with cleverly placed consent trackers, which cleverly use “dark patterns” to ensure that all cookies are accepted. What really made them angry over the course of the year was Google’s announcement that the Chrome browser in the PC version will be dispensing with third-party cookies from 2022 and replacing them with the concept of Federated Learning Of Cohorts.

What amused the laudator was the moment when Google inadvertently published details of the “Bernanke” project, which show how the company preferred itself in the advertising market. The Jedi Blue project, a possible quarrel between Facebook and Google, also does not testify to the integrity of the group. The consequence is clear: “Google receives the Big Brother Award 2021 for the massive manipulation of the Internet advertising market that has recently become apparent, starvation of creative people and the media as well as the expropriation of our digital personalities. Maybe this is all the beginning of something that really angry Google makes “, closes the detailed speech of prizes for a company that once promised” not to be angry “. It is the second time since 2013 that Google took the prize for “global data collection”.

With the “Public Intellectual” category, the award goes to a person who himself is still in the rather out of date Role of an intellectual sees who thinks with her speech acts that she can give public teaching. It hit the professional ethicist Julian Nida-Rümelin, one of the representatives of the “zombie arguments”, according to which data protection “was responsible for thousands of corona deaths”. In addition to this nonsense, Nida-Rumelin, spokesman for “digitization” at the German Ethics Council, spread the untrue claim that South Korea, Taiwan and Japan had mastered the pandemic with location-based “contact tracking”.

Linus Neumann, a spokesman for the Chaos Computer Club, commented on the claim in his Blog dryly: “Taiwan does not use a contact tracing app at all, Japan uses the same Corona app as Germany and South Korea cannot serve as an example either.” What Nida-Rümelin claims made the data protection activist Padeluun really angry and this is what his laudation sounds like: “No, Julian Nida-Rümelin and you other ‘anti-data protection’ apologists: data protection doesn’t kill. Data protection is that thin membrane that protects us all from the barbarism of state and commercial attacks. “

In addition to many critical words about Nida-Rümelin, who is often referred to as an intellectual and sometimes a philosopher, Padeluun has a clever suggestion ready: Whether we are talking about data protection or informational self-determination or even human protection, this protection is always “a global engine for innovation, is a topic that demands trained philosophical thinking like no other, because this damn digitally networked world cannot be compared with hammers and nails and cannot be represented with mechanical models. ” Perhaps a prize like the Big Brother Award calls for clear thinking – also about the meaningfulness of some price categories – and drives away the rumble, rumble and whisper of the Philoso drover.