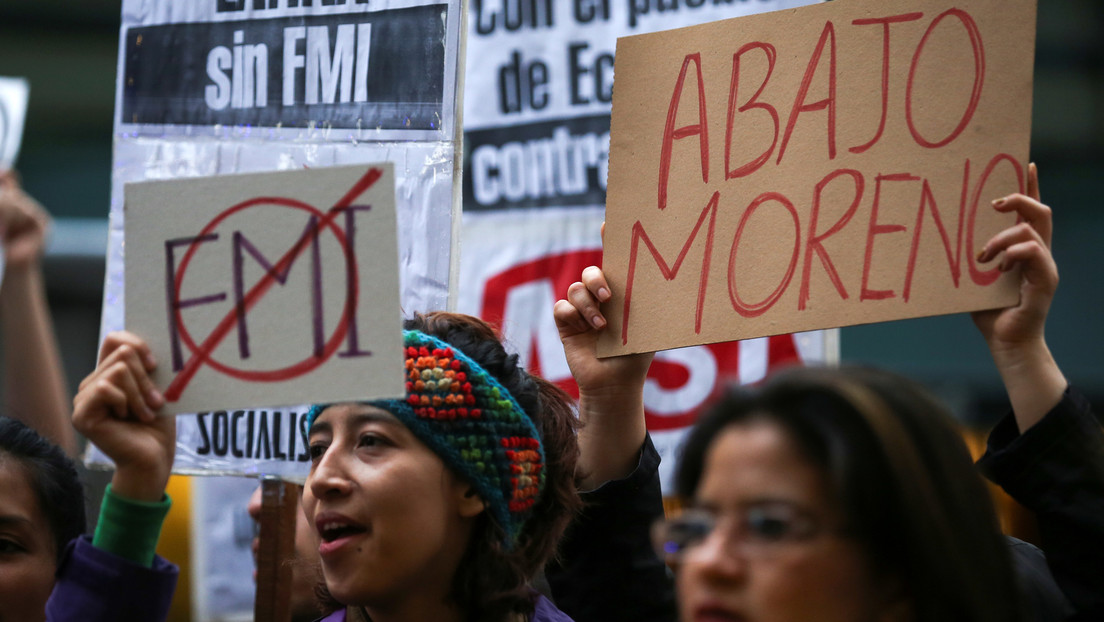 Defend dollarization or privatize the Central Bank? The 5 keys to a controversial law approved in Ecuador at the insistence of Lenín Moreno

This Monday, May 3 was published in the Official Registry of Ecuador the ‘Organic Law Reformation to the Organic Monetary and Financial Code for the Defense of Dollarization’, approved last April 22 in the National Assembly (Parliament) and signed by the president, Lenín Moreno, last Thursday .

The regulation, also known simply as the ‘Dollarization Defense Law’, received the green light in Congress after being sent three times by the Executive in a month and a half.

“This law alters the rules of the game of the monetary system of dollarization”, affirms the economist and academic Pablo Dávalos, director of the Alternative and Heterodox Economy Forum, which qualifies it as a “privatization of the Central Bank”.

The economist says that “it is one of the most aggressive reforms“which, in his opinion, In the context of a dollarized nation (whose currency is not its own), “it puts dollarization at risk, puts the entire financial system at risk” and “generates a lot of legal insecurity for the country.”

For the approval of this law, Moreno was very insistent. A first document of the project was presented by the Executive to the National Assembly on February 8, but two days later the Legislative Administration Council (CAL) of Parliament rejected it.

The project was sent back to Congress on February 23, the same council of Parliament put it to a vote on March 1 and, again, it was rejected. The third shipment was made on March 24, five days later it was qualified by the CAL, which forwarded it for its respective treatment in the Economic Regime Commission of the National Assembly, and on April 22 it was approved in plenary session.

But What was the reason for so much insistence that this regulation be approved? To understand this, you have to know that in March 2019, the Ecuadorian government signed a program with the IMF, which was suspended in 2020 because the country did not meet some of the goals set by the international body; In September last year, the institution’s Executive Board approved a new agreement for a loan of 6.5 billion dollars over a period of 27 months, within the framework of the Expanded Service (SAF) of the IMF.

“The main reason why Moreno insisted so much on the approval of this law is because it was one of the commitments with the International Monetary Fund,” explains Erik Mozo, also an Ecuadorian economist.

The regulations, Dávalos comments, comply with specific instructions designed by the IMF in its different SAF agreements. He mentions that both the document signed in 2019 and in 2020 establishes “the autonomy of the Central Bank”, one of the axes of the regulations.

The economist says that if they did not give way to this law, the extended financing agreement of the IMF and a third disbursement for 400 million dollars expected for this date would be put at risk.

About his rejection twice in Parliament, Dávalos explains that it was due to the fact that the original text did not come from the Ecuadorian Executive, but directly from the IMF. Then, when presented to the National Assembly, it returned it because the document “did not appear in the format of the laws of the Republic”, for example, “it was not articulated.”

2.- The focus on the Central Bank

Before sending the document to Parliament for the third time, Moreno gave a speech, on radio and television, on March 10, in which he asked the assembly members to approve the norm and pointed out that the norm states that the Central Bank of the Ecuador (BCE) is “autonomous” and “technically independent”.

“With this Law we avoid that the deposits that are in the Central Bank are used as petty cash at the whim of the incumbent president“he mentioned.

That character of “independence” from the ECB is one of the most controversial points of the law and is where some economists, such as Dávalos, refer to the “privatization” of the Central Bank.

Although the law says that these boards will be part of the Executive Function, to be part of any of them, among the requirements that the interested parties must meet is “professional experience of at least 10 years in relevant management or administration functions in the monetary and / or financial sphere “; In the case of the Financial Board, it is added that they can also come from “insurance or securities”.

In addition to this, the requirements also state that the person cannot have been the owner in the last 12 months prior to the designation, directly or indirectly in a percentage equal to or greater than 6%, of the subscribed and paid capital or of the share capital in entities of the private, popular and solidarity financial sector, insurance, among others.

In this regard, Mozo indicates that the regulations still leave a space for people who have “up to 5.99% of capital in a private bank to form part of any of the boards.”

He adds that these requirements are “so soft” that “there is a high probability that board members are related to private banking “, which would imply, he indicates, that “the regulated would become regulators.”

There is a deregulation of banking, it is transferred to the banks that adopt the mechanisms of control, regulation and banking supervision

“Now, those who are going to establish the regulations, controls and policies come directly from the private sector,” adds Dávalos and explains: “By handing over to the private sector the definition of monetary, financial and credit policies, through directories […] that is privatization, that implies privatizing public policies “.

With this, the economist considers, “there is a deregulation of banking, it is transferred to the banks that adopt the mechanisms of control, regulation and banking supervision”, and, furthermore, “all relationship and all management of the Executive regarding monetary policy “.

Another issue that has criticized this regulation, and which also makes the “privatization of the ECB” be considered, is that it establishes that the Central Bank must backing 100% of private bank deposits of the country with international monetary reserves, as indicated by the “backup rule” provided for in the law.

“That means that if the State needs the money from the monetary reserves for other things, such as paying debt, financing imports, insuring social security deposits or moving that money to use fiscal policy that stimulates economic growth to face The crisis, first, necessarily, it has to have 100% of the private banking deposits backed, if it does not have it, it cannot do anything, “says Mozo.

From the Ministry of Finance they have indicated that the approved regulation “seeks to safeguard the deposits that are in the Central Bank of Ecuador for the benefit of citizens.”

If the bank reserve is eliminated, banks can withdraw all the money they want from their total capital outside the country

The law also eliminates the banking reserve, which is the proportion of the capital of private banks that has to be in the country.

“If the bank reserve is eliminated, banks can get all the money they want of the total of its capital outside the country “, explains Mozo.

Taking these two points into account, this economist points out that the law creates “a scheme of socialization of losses, but privatization of profits”; in other words, “while banks back deposits in their banks with monetary reserves, their money is outside the country.”

Dávalos and Mozo also mention a “deregulation of interest rates and costs of financial services,” in addition to increasing regulations on liquidity, solvency and equity for savings and credit cooperatives and community funds.

So, says Dávalos, “legislation is passed against cooperativesIn such a way that almost three-quarters or four-fifths of all cooperatives practically disappear and only a handful of these survive, which are obliged to become a kind of banks. “

“Obviously, for the banks it is very positive, because it allows them to manage the interest rate, that they can send large financial resources abroad, without having to be obliged to keep reserve coefficients in the country,” says Dávalos.

But, put another way, there would be “an intense process of capital flight”, adds the director of the Alternative and Heterodox Economy Forum. It also warns of other consequences:

Beyond the negative consequences that Dávalos lists on the law, the Alternative and Heterodox Economy Forum has shown some unconstitutionalities.

For example, the economist details, Article 308 of the Constitution of Ecuador says that “the regulation and control of the private financial sector will not transfer the responsibility of bank solvency nor will they imply any guarantee from the State.”

“When the law says that international reserves have to guarantee 100% of the private’s liabilities, that is unconstitutional, because the Constitution says that the State cannot grant any guarantee to the private financial sector,” explains Dávalos.

Also, adds the economist, number 7 of article 290 of the Magna Carta “prohibits private liabilities from being backed by public resources.”

Likewise, the recently approved regulations indicate that the Central Bank has among its functions “to implement policy in the monetary sphere”; while the Constitution, in its articles 261 and 303, gives exclusive competence to the central State and, in particular, to the Executive Branch.

Also, the articles that establish the new Financial Policy and Regulation Board raise issues of unconstitutionality, because it generates duplication of functions (with the Superintendency of Banks), prevents the harmonization of monetary policy because this Board is separated from the Policy Board and Monetary Regulation, and it also contradicts articles 303 and 261 of the Constitution on the powers of the central State.

In view of this, the Forum plans to go before the Constitutional Court to present a claim of unconstitutionality; But, they also hope that in the next National Assembly, which is installed on May 14, the benches with the largest number of legislators, which are the Citizen Revolution or Union for Hope coalition (correísmo) and the Pachakutik Plurinational Unity Movement. (indigenismo) can repeal the law.