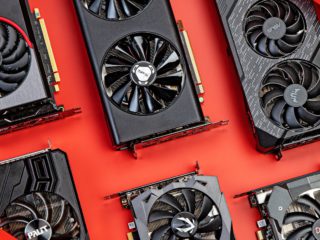 A horror for PC gamers, a windfall for companies: manufacturers of desktop graphics cards and retailers benefited from poor GPU availability in the first quarter of 2021 with sales of 12.5 billion US dollars – an increase of 360 percent compared to the beginning 2020. Due to the global shortage of chips and components as well as the high demand from crypto miners, the demand for graphics cards exceeds the supply, and prices are high as a result.

Meanwhile, AMD and Nvidia are not getting any bigger pieces of the pie, as the two companies sell their GPUs to other manufacturers at fixed prices – often in a bundle with memory modules. Market researcher Jon Peddie Research sums it upthat even an entry-level desktop graphics card averaged nearly $ 500 at the beginning of the year.

Due to the unsupervised demand, the traditional decline in sales did not materialize in the first quarter of 2021: Manufacturers sold 7.1 percent more desktop graphics cards than at the end of 2020. The number rose by 24.4 percent year-on-year.

AMD has stopped the downward trend of its own Radeon models and Nvidia has taken three percentage points of market share. Radeon GPUs for desktop PCs came to 20 percent, GeForces analog to 80 percent. At the beginning of 2020 it was 31 to 69 percent. Desktop graphics cards and notebook graphics chips added together, came AMD laut Jon Peddie Research in the first quarter of 2021 to 19 percent, Nvidia to 81 percent (Q4 / 2020: 18 to 82 percent).

If you include processors with integrated graphics units in the equation, the market grew by almost 39 percent to 119 million PC combination processors and graphics chips sold within a year. Compared to the end of 2020, AMD’s shipments fell by 1 percent – so the company has sold fewer CPUs with integrated GPUs.

Intel’s sales fell minimally by 0.3 percent, while Nvidia’s rose by 3.9 percent. As a result, Nvidia has increased its own market share from around 14.6 to 15.2 percent. AMDs dropped minimally to 16.7 percent. Since Intel integrates a graphics unit in most processors, the company has a high market share of 68.2 percent.