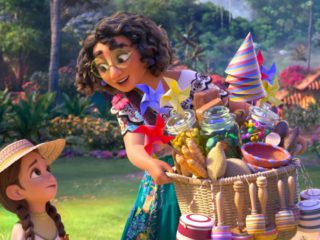 After Warner Bros., Disney cinema chains are also promising a time window in which films are shown exclusively on the big screen. On Friday, Disney announced that at least all other strips planned for 2021 should be shown exclusively in the cinema for at least 30 days before they are shown on the Disney + stream service.

The musical “Encanto” planned for November 24th will be shown exclusively in cinemas for 30 days, Disney announced. All other films planned for 2021 should only appear on the in-house streaming service Disney + after at least 45 days. These include the Marvel film “Eternals” and Steven Spielberg’s “West Side Story”. “Shang-Chi And The Legend Of The Ten Rings” was already released exclusively in the cinema.

Disney offered several of its films directly on Disney + during the pandemic. In the case of the superhero film “Black Widow”, this even led to a lawsuit: leading actress Scarlett Johansson sued Disney for breach of contract: she had been promised an exclusive film release on the screen, her earnings were based on the cinema revenues. “Black Widow” was released in theaters and on Disney + at the same time.

Figures from Disney proved the success of this hybrid strategy: In its first three days, “Black Widow” sold 80 million US dollars in US cinemas, and according to Disney, another 78 million US dollars came from international ticket sales. Black Widow also grossed $ 60 million on Disney + in the same period. Several cinema chains had boycotted “Black Widow” in protest against the simultaneous streaming release.

In August, the Warner Bros. film studio and the AMC cinema chain agreed that all films in the coming year should initially appear exclusively in theaters for 45 days. It is a compromise solution: before the pandemic, movies were mostly exclusively available in theaters for 90 days.