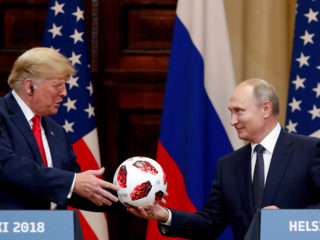 The former president of the United States, Donald Trump, has addressed his successor Joe Biden before his summit with Russian leader Vladimir Putin, wishing him not to fall asleep during this important meeting, which will be held in Geneva on Wednesday 16.

“Good luck to Biden in dealing with President Putin. Don’t fall asleep and please give him my warmest regards!” Trump wrote in a statement released Thursday.

Trump tells Biden not to fall asleep in his meeting with Putin pic.twitter.com/AJ8qz3Wjkl

Moscow has described the meeting between Putin and Biden as “very, very important,” but warned that no one should have high hopes about its possible results. “There is no reason to expect any progress to reach mutual understanding” or to achieve a restoration of relations, Kremlin spokesman Dmitri Peskov said in this regard.

For his part, Trump recalled his summit with the Russian president in July 2018 in Helsinki, which he described as “a great and very productive meeting” in which the US “gained a lot, including the respect of President Putin and of Russia “despite the” overdue description of the fake news “about what happened.

Both the US corporate media and important personalities of the country’s politics negatively evaluated Trump’s behavior during his meeting with the Russian leader, calling it “shameful” and “traitorous.” Many rated the bilateral conference as a “missed opportunity” for Washington.

“As for who I trust, they asked me, if in Russia or in our ‘intelligence’ of the Obama era, that is, people like Comey, McCabe, the two lovers, Brennan and Clapper, and many other idiots; or in Russia , the answer, after all that has been discovered and written, should be obvious, “Trump said in his message. “Our government has rarely had so many criminals like those working for it,” he said.

In 2018, James Comey was the director of the FBI in 2018 and Andrew McCabe, his deputy. Agent Peter Strzok and attorney Lisa Page, who were having an extramarital affair, were key figures in the FBI’s ‘Crossfire Hurricane’ investigation of Trump. The two were also behind the investigation into the Trump Administration’s first national security adviser, Michael Flynn.