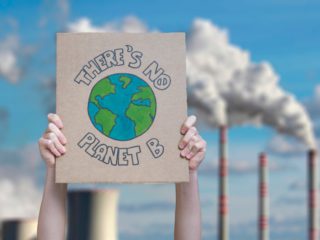 On Monday, the German Environmental Aid (DUH), together with children and young people from the area of ​​”Fridays for Future”, submitted new climate lawsuits to the Federal Constitutional Court against the state governments of Hesse, Mecklenburg-Western Pomerania, Saarland, Saxony and Saxony-Anhalt. The complainants complain that none of the five federal states has yet had a state climate protection law. However, they are de facto obliged to comply with the relevant regulations by the Paris Climate Protection Agreement.

“Climate protection is not only a federal, but also a state matter”, stressed the Berlin environmental lawyer Remo Klinger from the law firm Geulen & Klinger, who wrote the complaints. Nonetheless, it looks “even worse than at the federal level” for all the countries sued in this field. The governments concerned “are simply doing too little”.

The black-green coalition in Hesse is currently working on a climate protection law. The local government also adopted a climate protection plan in 2017. According to DUH, however, both projects are unsuitable for fulfilling the relevant constitutional obligations. The binding annual targets for the remaining CO2-Budget to be adhered to. Alena Hochstadt, who is one of the three complainants from Hesse, expressed her fear “that we will be hit by floods, storms, droughts and other natural disasters exacerbated by the climate catastrophe”.

Lawsuits based on the watering can principle

The Hessian ministers for climate protection as well as economy and transport, Priska Hinz and Tarek Al-Wazir from the Greens, expressed their surprise at the complaint: “Obviously, the DUH has not yet understood that we are much further in Hesse.” With the Energy Future Act, there have been binding requirements there for years. The final energy consumption in the area of ​​electricity and heat is to be covered by 100 percent from renewable energies by 2050 at the latest. The cabinet has also already determined the path to climate neutrality and taken measures to expand local public transport, for example. With lawsuits based on the watering can principle, the DUH is unfortunately doing a disservice to climate protection.

In Mecklenburg-Western Pomerania, the plaintiffs are uncomfortable with the fact that a draft for a state climate protection law failed in January and that there will be no corresponding requirements for the foreseeable future. Furthermore, the action plan for climate protection in the coastal region “does not contain any relevant objectives and has come about without the democratic participation of the state parliament”. Government representatives from Mecklenburg-Western Pomerania initially did not respond to a request from heise online for a statement.

The complainants put forward similar arguments in the three other federal states. In Saxony-Anhalt there is only one climate and energy concept that “does not contain any relevant objectives,” they say. In Saxony the situation is comparable, where a legislative proposal was buried in December. There was a lack of evidence to push for corrections to preserve freedoms. In Saarland, there is not even a plan to limit global warming.

Saxony’s Environment Minister Wolfram Günther (Greens) said on Monday that the lawsuit could give politicians steam in order to move ahead faster than planned. Climate protection had “not been a priority issue for far too long” in the Free State. The entire state government must now tackle the achievement of climate neutrality even more consistently and, above all, in a binding manner. However, a specific package of measures is also decisive.

It was only in July that the DUH and young activists appealed to the Federal Constitutional Court about the lack of climate protection laws in North Rhine-Westphalia, Bavaria and Brandenburg. Previously, the organization and “Fridays for Future” campaigners, who were happy to complain, had successfully taken action against the Federal Climate Protection Act. The Karlsruhe judges declared this unconstitutional in April and obliged the legislature to implement the goals of saving CO2-To regulate emissions more precisely in order to ensure the protection of the livelihoods of future generations. Experts assume that the tightening decided in June does not meet the constitutional requirements either.