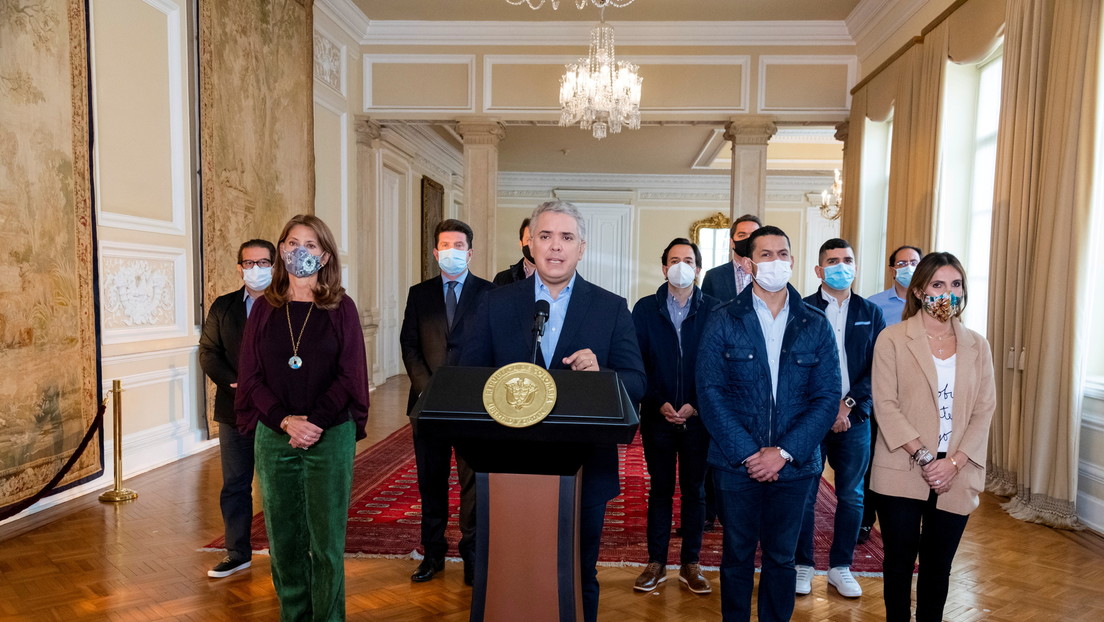 The president of Colombia, Iván Duque, defended the actions of the public force on Tuesday, amid the multiple complaints of human rights violations committed during social protests, which have left at least 19 fatalities.

During a message in which he spoke about the effects of the covid-19 pandemic, Duque made reference to the massive social protests in the country and to those who have allegedly “appealed to vandalism, terrorism and irrational violence to snatch peace of mind.”

The president, severely questioned in recent days, expressed his support for the actions of the Armed Forces and the Police: “We must support our public force, at the same time that we demand from it the greatest rigor in fulfilling its constitutional mission.” , He said Duque in a video broadcast by the office of the Presidency of the Republic.

“The men and women who wear the uniforms of the Armed Forces and Police embody our democratic values. Therefore, citizens must recognize their value, be their ally, “added the head of state.

The president affirmed that his government has the obligation to respond “with forcefulness from the law” against the protesters who, in his opinion, seek “to deplete cities, put thousands of people out of work, destroy public transport systems and cause poverty.”

Although the international community has called on the Colombian Government to stop the repression of the Colombian National Police and the Mobile Anti-Riot Squad (Esmad) against protesters, Duque assured that it was civilians who they shot “defenseless citizens” and attacked “viciously“ to the cops.

Social organizations have documented 26 homicides against protesters; 142 victims of physical violence committed by uniformed men; 761 cases of arbitrary detentions and 56 complaints of disappearances in the context of the demonstrations.

“As president of the Republic, and supreme commander of the Armed Forces, if an action is presented outside the framework of the Constitution, which affects the rights of the people, I will not accept it in any way,” said the president on Tuesday. . However, he reiterated that the security institutions have the “support” and “demand” of the Government.

In the framework of the social protests that began on April 28, there have been multiple police abuses against protesters.

The United Nations High Commissioner for Human Rights in Colombia, Juliette Rivero, denounced this Tuesday that members of her commission were threatened and attacked by the security forces while they followed up on the protests in the city of Cali, capital of the Valley of the Cauca, which began last Wednesday.

The organization Amnesty International confirmed that the Police have made “use of lethal weapons in several incidents“and that he used” less lethal weapons indiscriminately “, including tear gas and water cannons.

Specifically, Amnesty International documented the use of a Galil Tavorn rifle during the police repression of the demonstrations in Cali on April 30 and verified that policemen pointed semi-automatic weapons directly at unarmed protesters in Popayán (Cauca).

“In another incident, on May 1 in Bogotá, an armored vehicle was verified firing live ammunition”, denounced the organization.

More than 800 injured and damaged infrastructure

Meanwhile, Colombian Defense Minister Diego Molano, declared this Tuesday that the military presence in the streets of the country provides “exceptional” support to the police in the face of “the terrorist threat.”

According to his words, a policeman died and more than 800 people – both uniformed and civilians – were injured in recent days as a result of the “impact of terrorist actions.” He also indicated that a large number of public infrastructures and private businesses were also damaged.

During his message, Duque announced that his government will install “a space to listen to citizens and build solutions.”

In this sense, the president invited all institutions, political parties, companies, governors, mayors and leaders of civil society to participate in this space, which, he assured, will have the following objectives:

“The results of this space will translate into initiatives that we can quickly articulate, both the national government and local governments,” said the president.

A controversial tax reform introduced by the Duque government sparked a wave of protests in Colombia since last week. Although the president withdrew the initiative, thanks to social pressure, the brutal repression of the Police and the Army against protesters revived the protest in the streets.