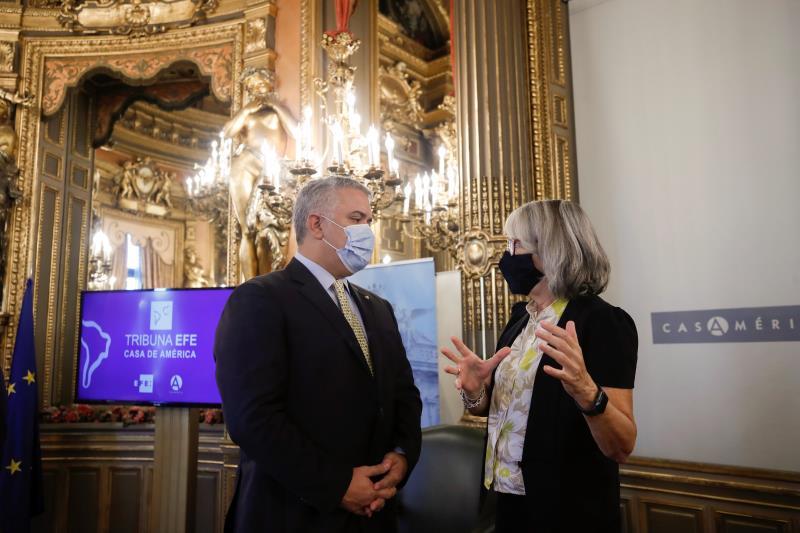 Duque presents in Spain a stable Colombia “ready to do business”

Madrid, Sep 17 (EFE) .- Colombian President Iván Duque presented this Friday in Madrid a Colombia “open to doing business”, with “political and legal stability”, in which the largest infrastructure projects and of transformations in energy transition throughout Latin America and the Caribbean “, creative and political industries destined for the fourth industrial revolution.

The second day of Duque’s official three-day trip to Spain had a marked economic nature, with the participation of the Colombian president in various forums in which he exposed the benefits of the Latin American country for foreign investment, and highlighted the efforts of his country in clean energy and the fight for climate change.

Those were some of the arguments that the Colombian president used in an interview with the president of the EFE agency, Gabriela Cañas, in the framework of the Tribune organized by the international Spanish news agency together with the Casa de América.

In it, Duque certified that during his visit to Spain, Spanish investment commitments in Colombia were materialized for more than 2,500 million dollars in infrastructure, renewable energy and services sectors.

According to figures from the Colombian Ministry of Commerce, Industry and Tourism, direct Spanish investment in Colombia from January to June 2021 amounted to 871 million dollars, accumulating 6,340 million since the third quarter of 2018.

He also referred to tourism as one of the potential for Spanish investment in his country: “We want more Spaniards to visit our country and help us turn tourism into a new oil,” he said.

For potential investors, Duque pointed out that the tax reform carried out by his Executive “of eminently social significance” will not influence companies that want to establish themselves in Colombia.

In that sense, he explained that the reform maintains a VAT deduction on 100% of capital goods, 50% of the local industry and commerce tax on income tax, the elimination of presumptive income, “and although the corporate rental rate has increased a bit (to 35%) and is still substantially lower than what we had in 2018 “.

PETITION TO THE IMF