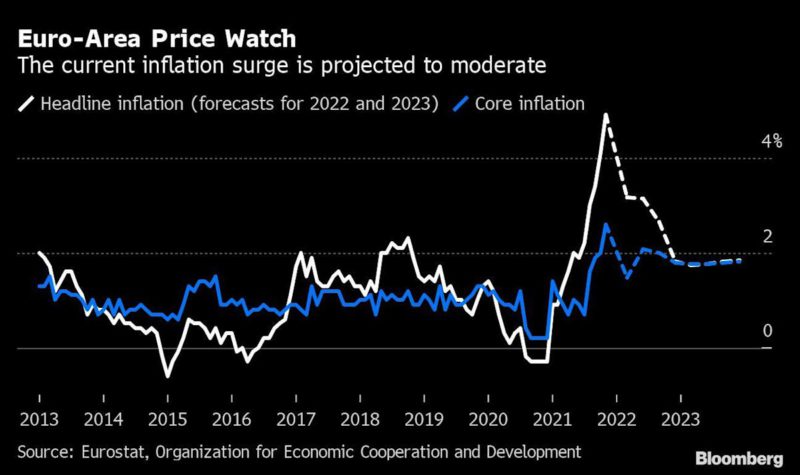 (Bloomberg) – The European Central Bank should continue its strong supportive stance as long as the current episode of rising consumer prices appears to be temporary, the International Monetary Fund said.

“Given that core inflation dynamics are expected to remain weak in the medium term below the baseline, the ECB should analyze transitory inflationary pressures and maintain a highly accommodative monetary policy stance,” said the fund with headquarters. in Washington.

The comments coincide with the views of ECB President Christine Lagarde, who insists that the price hike is due to factors such as energy costs and supply problems that will not last. In contrast, Federal Reserve Chairman Jerome Powell said last week that “transitory” is a word that should no longer be used to describe what is happening.

The IMF warned that the risks to inflation in the eurozone “are tilted to the upside” and that the authorities must be vigilant to wage pressures.

“Upcoming salary negotiations, which are expected to be more frequent than in previous years after many contract renewals were put on hold during the pandemic, will need close monitoring,” the fund said. “The ECB should also be ready to reduce and then cease asset purchases and long-term conditional loans, followed by a gradual adjustment of policy rates, should high inflation prove to be more durable.”

The IMF also said the ECB will have to “clarify soon” how to maintain monetary support when its Pandemic Emergency Purchase Program and third rounds of ultra-cheap loan offers are phased out. The central bank has signaled that it plans to set the future of its bond purchases in its December 16 decision.

Regarding eurozone growth, IMF Managing Director Kristalina Georgieva said she sees the possibility of a “modest downward revision” of the region’s economic forecasts, due to a fourth quarter that “looks weaker.” due to supply problems, high energy prices and new mobility restrictions due to the pandemic. The IMF currently forecasts an expansion of 5% for 2021 and 4.3% for 2022, and the release of the updated forecasts is scheduled for January.