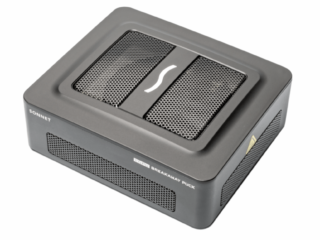 More graphics performance if required: eGPUs retrofit powerful GPUs externally, which is particularly appealing for notebook or MacBook users whose internal graphics performance is limited. In addition to classic eGPU housings, the manufacturer Sonnet also offers complete eGPUs with integrated graphics cards: The model series called “eGPU Breakaway Puck” is intended for Intel Macs with a Thunderbolt 3 port; according to the manufacturer, it is not certified for Windows PCs. It does not work on M1 Macs, there is no eGPU support.

The eGPU also serves as a dock to which monitors and USB devices as well as a Thunderbolt display up to 6K can be connected.

Sonnet has two configurations to choose from: one with AMD’s Radeon RX 5500 XT and 4 GB of GDDR6 graphics memory or one with Radeon RX 5700 and 8 GB of VRAM. The graphics card cannot be replaced. A fan, which can only be heard roaring under load with 0.8 (RX 5500 XT) or 1.6 tones, cools the puck.

The Thunderbolt graphics card is the size of an external desktop hard drive and would be great to take with you. However, you also need space in the backpack for the equally large, massive power supply unit, from which the eGPU Breakaway Puck draws power. You connect it to an Intel Mac via Thunderbolt 3. At the interface, the puck charges a MacBook with up to 60 watts via USB Power Delivery.

On the back there are two USB-A ports with 3.0 speed. There is also an HDMI socket, a DisplayPort and another Thunderbolt 3 port. You can control a 4K monitor at 60 Hertz at each of these connections. Up to three displays can be operated at the same time. LG’s 5K display or Apple’s 6K monitor Pro Display XDR also work with full resolution on the Thunderbolt port.

Graphics-heavy applications benefit from the additional computing power: While a MacBook Pro 13 “from 2020 with Intel graphics in the action game Shadow of the Tomb Raider in Full HD delivered 21 frames per second (fps), the repetition rate was on the puck with the RX 5500 XT with 46 fps more than twice as high, with the RX 5700 it even delivered 62 fps.

It took our MacBook 8 minutes and 45 seconds to transcode a 4K video in Davinci Resolve. Both pucks cut the time to about three and a half minutes. The eGPUs were also on par in Cinebench with frame rates of 88 to 89 fps, but clearly ahead of the Intel chip in our MacBook (52 fps). Here the transmission via Thunderbolt slowed down the more expensive puck.

At 750 and 1130 euros respectively (manufacturer prices), the Breakaway Puck is not cheap. If you buy an eGPU housing and a PCIe graphics card, however, you pay the same amount and cannot operate a Thunderbolt display on it. If you are looking for power for video editing or 3D rendering or want to connect additional monitors, the RX 5500 XT is enough. Gamers are better off using the RX 5700.