‘El Hormiguero’: The Javis confirm that they have a WhatsApp group with Madonna 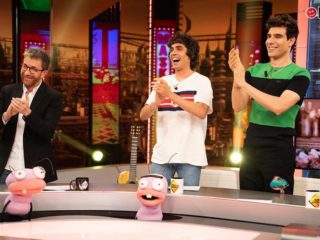 Javier Ambrossi and Javier Calvo, better known as Los Javis, attended ‘El Hormiguero’ this Wednesday to talk about his new professional projects, and take stock of his career. They do so after having become two of the most beloved faces on television.

The creators of such successful projects as ‘La Llama’, ‘Paquita Salas’ or ‘Veneno’, They are currently part of two of the current formats on Atresmedia, ‘Mask Singer’ on Antena 3 and ‘Drag Race Spain’ and Atresplayer Premium.

After succeeding with ‘La Llamada’ and being part of the team of teachers from the boom of ‘OT 2017’, their professional career suffered a meteoric rise, and Pablo Motos wanted to talk about this with them. Well, despite having reached very high, they continue working with the same enthusiasm and the same desire as when they started working together.

“We are very fortunate to be able to work on what we like. I have loved television since I was little and seeing myself in formats that I like and admire such as ‘Mask Singer’ or ‘Drag Race Spain’ is a privilege ”, stated Javier Ambrossi.

On ‘Mask Singer’, Pablo Motos emphasized the face that the two have every time they discover who is hiding under the mask. Y Javi Calvo took the opportunity to tell a secret of the program: «I don’t know if this can be told, but I’m going to tell it. I don’t know if people know that the mask is revealed in absolute secrecy. There is no one, they throw the whole audience and the whole team off the set less to a cameraman, to the councilor, to Arturo Valls and to us, so that the name of the person who is hidden under the mask cannot be filtered».

What’s more, They assured that they are good at keeping secrets, because they have never told anyone who is behind each mask. “Not even, after a few beers, in a more relaxed atmosphere,” said Calvo. Not even at ‘Los Javis’ parties. At the ‘Los Javis’ parties they talk about everything except those who are inside the masks »added Javier Ambrossi.

Ambrossi also explained how they had met the Queen of Pop: “It was three in the morning, I was awake and suddenly I received a message on my mobile: ‘Madonna wants to meet you in 5 minutes. ‘ Then I woke up Javi, who was asleep, I told him to shave and we went down to the street at ten past three in the morning. Suddenly he appeared and told us that he had really liked ‘Venom’, that he had loved it, that it had moved him… ».

“We were commenting on the series and he told us that he wanted to meet us, that we go to meet him”he added. Said and that, since they traveled to London and were with Madonna at her house. “She is a wonderful person, truly magical,” added Javier Calvo.