Elections in Peru: results of the presidential elections, live 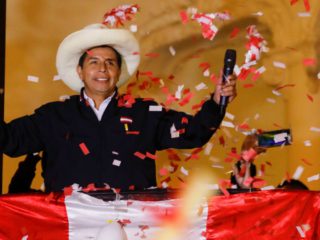 Pedro Castillo, candidate of Peru Libre, has declared himself the winner of the Peruvian presidential elections before the end of the counting of the votes. “We will be a government that respects democracy, the current Constitution and we will create a government with financial and economic stability,” Castillo said on Tuesday night in Lima. The conservative candidate, Keiko Fujimori, denounced on Monday a “systematic fraud” in the second electoral round, explaining that her party found a “series of irregularities” in the vote, without giving details. Castillo leads Fujimori by 71,700 votes with 98.3% counted, according to data from the official count released by the National Office of Electoral Processes (ONPE). The last update of the ONPE gives 50.2% of the votes to the rural teacher, for 49.8% of the conservative candidate.

Follow live the details of the election with MRT: