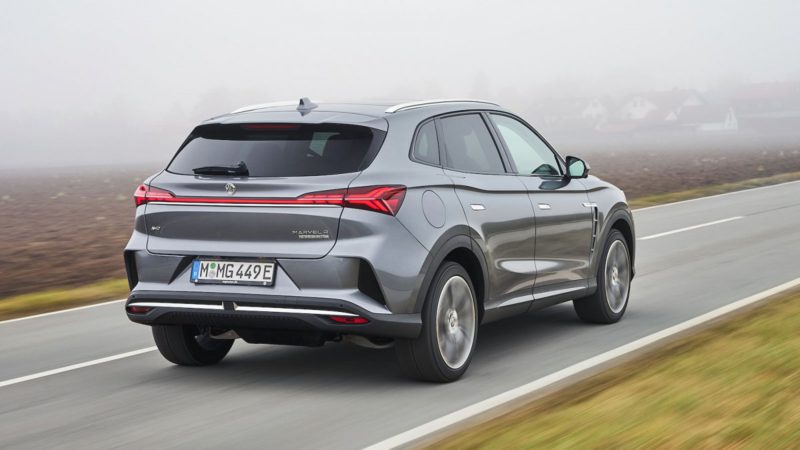 The MG brand was not heard from for decades until it was reactivated in China. Instead of puristic roadsters, the trademark now adorns modern electric SUVs from the world’s largest automobile country. The MG Marvel R Electric AWD is fresh in the European program.

A mid-range crossover model with a pleasing design, electric drive and a range of around 400 kilometers is a surprise in view of similar concepts such as the VW ID.4 (test), Audi Q4 e-tron (test), BMW iX3 (test), Lexus UX 300e (test), Mercedes EQA (test) are in the shop windows. The large number of electric cars on offer is due to the success that crossovers in this format have enjoyed for decades.

The basic MG version as Marvel R Electric with rear-wheel drive and 132 kW is available for 42,900 euros, but in this all-wheel drive segment counts so much that MG also offers it as Marvel R Electric AWD with 212 kW, then for 50,990 euros. With the competition, similarly configured models cost more than 60,000 euros, here you also pay for the image and can count on a higher resale price. The MG is a pretty crossover model, but the manufacturer SAIC has to be spelled out for most people in this country (in “Shanghai Automotive Industry Corporation”).

That could change soon, however, because the overall package of the 4.67 meter long MG Marvel R Electric is right. It not only offers a successful design, but also convinces with an appealing quality of workmanship. In everyday use, the Marvel R Electric AWD hardly offers more thrust than the much weaker version with 132 kW and 410 Nm. The top model only has 212 kW and 665 Nm torque in the “Sport” mode.

The 4.67 meter long MG Marvel R Electric has been in the most popular format for years – as an SUV.

From a standstill, the 1.9-ton truck reaches 100 km / h in 4.9 seconds, and unregulated it can go up to 200 km / h. The advantage, of course, is not the dynamic extra power and certainly not the top speed, but rather good traction in poor road conditions. That fits the design: the chassis is comfortable, but not underdamped. Most people should get used to the smooth steering quickly, but a little more feedback from the road would be desirable. In general, however, the car is more geared towards quiet travel, which it underlines with its low level of drive and road noise.

The Marvel R Electric is only available with 70 kWh. While the rear-wheel drive car can manage 400 kilometers to the next charging process, the all-wheel-drive top model only has 370 kilometers. This applies to an assumed standard consumption according to WLTP between 19.4 and 20.7 kWh per 100 kilometers, which is likely to be exceeded quickly in winter, for example. In addition, there is a maximum charging power of only 92 kW. Even the modern models VW ID.4 (test) or Skoda Enyaq (test) with their 125 and 135 kW, respectively, now look old after Hyundai / Kia introduced the 800-volt technology in the Hyundai Ioniq 5 or Kia EV6 (test) . The charging times decrease significantly, even if not as drastically as it would already be technically possible.

The MG Marvel is as chic on the outside as it is on the inside. The space available fits both front and rear, even if the adjustment range of the electrically adjustable seats could be larger. Behind the electrically opening tailgate there is a volume of 357 liters, which can be increased to up to 1396 liters by folding down the rear seat. That is not particularly voluminous in comparison. With the all-wheel drive there is also no need for frunk because of the front engine above the front axle.

In the interior one discovers the theme of “converging lines” …

Buttons and switches are missing for many functions, driving program, navigation, entertainment or air conditioning have to be controlled laboriously and with little reliability via the 19.4-inch portrait display in the center console. To simplify operation, SAIC should at least animate the instruments a little larger and offer a head-up display at least as an option.

When it comes to touch screen fashion instead of safe operation, the Chinese product hardly differs from the established ones from the USA, Korea, Japan or Europe. It remains to be seen whether the inconspicuous swimming at a lower price will be enough for a success. The Chinese shouldn’t be underestimated, after all, the Korean manufacturers who are now successful today started their way to Europe in a similar way and are now among the innovation drivers among the long-established brands.