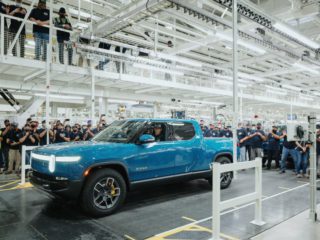 The first production car of the R1T electric pickup rolled off the assembly line at the plant of the US manufacturer Rivian. After months in which his company built pre-series cars, the production of vehicles that are to be handed over to customers has now started, wrote Rivian CEO RJ Scaringe on Twitter.

The R1T is built in Rivian’s own factory in Normal, Illinois. It is faster on the market than Tesla’s planned electric pickup Cybertruck, which could meet the same demand. This should not go into series production until 2022.

To date, Rivian has not yet had a network of dealerships where interested parties could view the car on site and test drive it, i.e. it is sold through direct sales, customers put their equipment together on the Rivian website and reserve a car. They may be able to test drive this beforehand on a road show planned by Rivian.

The Rivian website shows that the R1T starts at $ 73,000 and is expected to ship from January 2022. In the summer of last year, media reports said that Rivian could sell his cars in Europe next year. A pickup, however, corresponds more to US preferences, for Europe the R1S off-road vehicle, which Rivian has in the making, is more suitable.

In July of this year, Rivian closed another funding round that raised $ 2.5 billion. The largest financiers in this round include the Amazon Climate Pledge Fund as well as the US investment company D1 Capital and the automobile manufacturer Ford Motor. In total, Rivian has received around $ 10.5 billion from investors since 2019.

Series production of the R1T begins in mid-September.
(Image: RJ Scaringe on Twitter)

Amazon is particularly committed to Rivian, who has developed its own electric van for Amazon. Rivian is expected to build 10,000 of these vans for Amazon by 2022, and 100,000 by 2030. Amazon intends to use it to improve its carbon footprint.