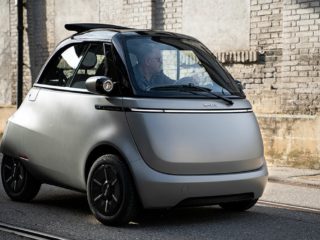 The electric car manufacturer Microlino has presented the third prototype of its cabin scooter based on the BMW Isetta. The interior was redesigned and a new folding roof was added to the vehicle. The company has also partially revised the chassis and body.

The new version comes very close to the production version, emphasizes Microlino. It plans to present the latest version in September at the IAA in Munich, before that two prototypes should be ready.

On the dashboard behind the Lenrad there is a speedometer and a smaller touch display in the center, with which, for example, the heating is regulated. Compared to conventional switches, it takes up less space and can be expanded more flexibly.

Microlino wants to produce itself

The folding roof was developed by Magna Car Top Systems, which otherwise equips convertibles. It should be easy to open and close with one hand while driving.

The door is not opened with a handle, but is unlocked with a button under the headlight and then stands up a little so that it can be grasped. From the inside there is another button on the back of the handlebar that activates the door mechanism.

For the upcoming series production, Microlino has started to manufacture the production machines and tools and to plan the assembly steps. Production is to be taken over by the new Microlino Italia company in Turin, which was founded together with Cecomp. Microlino actually didn’t want to become a manufacturer itself, but has changed its mind because that is the only way to control quality and at the same time reduce production costs.

This is what the interior will look like in the finished third prototype in June 2021.
(Image: Microlino)

The 2.4 m long and 1.5 m wide car should then be available for 12,000 euros, weigh 513 kg and, depending on the battery configuration, drive 125 or 200 km at a top speed of 90 km / h. The Microlino should come from 0 to 50 km / h in 5 seconds. The company speaks of a battery charging time of 4 hours. The folding roof should be available as an option, as standard in the premium versions.