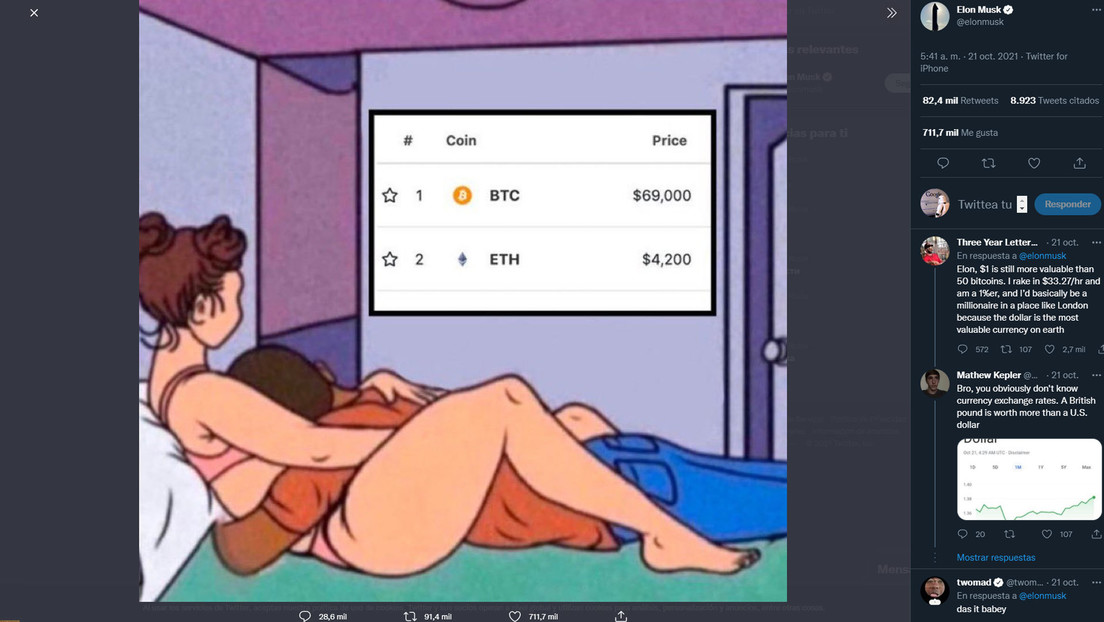 The non-fungible token (NFT) of the meme ‘Love in The Time of Web3’ (‘Love in the times of Web3’, in English) was acquired shortly after it was shared on Thursday by the founder of Tesla and SpaceX, Elon Musk , said to CNBC the creator of the meme, Eva Beylin.

The image consists of a drawing of a couple lying down watching the television embracing, which has already circulated on the networks for some time, but this time what appears on the screen is a quotation table that shows the high value of bitcoin (69,000 dollars) versus ether (4,200).

The 28-year-old Beylin put the image’s NFT up for sale the same night Musk tweeted it. Two days later, it sold for around $ 19,800 in ethers.

The buyer remained anonymous, but has already put the meme up for sale, and is now asking for around $ 275,000 in ethers for it.

As Beylin acknowledged, she was inspired by the post of another Twitter user, @shegenerates, who released the screenshot with bitcoin and ether prices. Subsequently, this capture appeared on Beylin’s meme. To compensate the user, he gave her 20% of the sum of the sale.

In a comment, @shegenerates indicated that he has blocked Musk on Twitter and did not see his post until it was shared by Beylin. “I would like to have all those ‘likes’ because I imagine how much serotonin my brain would generate with all that attention, but memes do not require permission, so it’s just great to see the things that I have shared out there,” he noted.

Meanwhile, the creator of the couple’s drawing remains anonymous, and it’s still unclear whether Beylin’s meme violates his copyright.