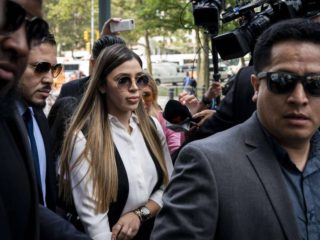 Emma Coronel, 31, has pleaded guilty this Thursday to three crimes related to the multimillion-dollar drug trafficking empire led by her husband, Joaquín El Chapo Guzman. The former beauty queen admitted her participation in the criminal network before a federal court in the city of Washington, as part of an agreement with the Prosecutor’s Office that would allow her to obtain a sentence of 10 years or less in prison. The US authorities accused her in February of collaborating with the kingpin in drug trafficking and money laundering. Prosecutors maintained that the defendant “worked closely with the management and control structure” of the Sinaloa cartel.

Coronel was detained in February at Dulles International Airport, near Washington, and has been in prison ever since. After two years of investigation, the US Department of Justice charged her with trafficking in cocaine, methamphetamine, heroin and marijuana, conspiracy, money laundering and participating in transactions with a foreign drug trafficker.

“He is very happy to leave this behind,” said his lawyer, Jeffrey Lichtman, leaving the court. The sentence will be made public in September.

In 2019, El Chapo Guzmán was sentenced in a New York court to life imprisonment for drug trafficking, plus 30 years in prison for gun violence and 20 for money laundering. Since then, he has remained in the Supermax prison in Colorado, the safest federal prison in the US According to documentation presented at the trial, El Chapo’s wife was one of those who orchestrated the boss’s escape from the Mexican high-security prison in The Altiplano, in 2015, through a tunnel that connected the shower in his cell with a safe house. Colonel was plotting to help him escape again in 2017, bribing a prison official.

The prosecutor in the case, Anthony Nardozzi, assured this Thursday that the defendant “served as an intermediary” to deliver messages to the cartel members after the arrest of her husband and also conspired with the kingpin’s children to “plan and coordinate” their prison breaks.

It is not common for drug traffickers’ partners to be prosecuted, but prosecutors in the El Chapo trial presented significant evidence that Coronel, the mother of two of the drug trafficker’s 10 children, was significantly involved in her husband’s criminal activity. The documents presented by the US authorities show that El Chapo’s loyal wife transmitted his orders from 2012 to 2014 to carry out drug shipments, in addition to helping him evade capture for years. Nardozzi added that Coronel had “instigated” the objectives of the Sinaloa cartel to introduce drugs into the United States and helped traffic more than 450,000 kilos of cocaine, 90,000 of heroin, 45,000 of methamphetamine and about 90,000 of marijuana.

The former beauty queen from Sinaloa, of dual Mexican and American nationality, was 17 when she met El Chapo, 51, at a party on a ranch. He came from a family with a tradition in the drug business and he knew perfectly well who the capo was. Soon after, she became the third wife of the master of the largest drug trafficking network in the world. “I am not aware that he is dealing in drugs. I’m in love with him, ”she used to say in interviews. What some media call the Kardashian de Sinaloa (in reference to the famous American television clan) is usually a recurring character in Mexican tabloids.

Coronel has been characterized by his loyalty to the test of everything, but his speech of total ignorance about El Chapo’s criminal businesses collapsed during the 11 months that his trial lasted in New York. Prosecutors demonstrated, among other things, that the woman took advantage of her conjugal visiting privileges when El Chapo was in jail to act as an emissary with the team that planned her escape in 2015. Two years later, when they again arrested the capo, Colonel She paid a prison official two million dollars to transfer her husband to Altiplano, the prison from which she had first escaped. The plan was not carried out and soon after, El Chapo was extradited to the United States, where he is serving a life sentence.

Subscribe here to the newsletter from MRT América and receive all the informative keys of the region’s news.