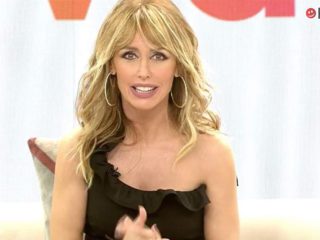 Emma García has surprised viewers with a very funny anecdote in ‘Viva la vida’ this weekend. The presenter has gone back to an event that happened to her a few years ago when she was on a plane, and that to this day she still finds it funny when she remembers it.

On that trip, Emma García put on a cap and this caused some people to realize that she was someone famous, but they couldn’t say who she really was. In fact, such was the mistake that they confused her with an international artist.

During the last program of ‘Viva la vida’, Emma explained that on the plane: “I was wearing a cap and curly hair and they told me if I was a famous singer, but no hahaha”, unable to contain his laughter as he told his own companions.

The team surprises @EmmaGarciaWeb from the terraces of Mediaset: «Now you know what is behind my smile» ❤
Congratulations! https://t.co/z5aj1NQmDE

Moments later Emma García confessed that the artist she was confused with at that time was Shakira, something that aroused laughter among his companions of ‘Viva la vida’. And they could not believe what he had just told them.

In addition to the anecdote of the presenter, Emma has not been the only one who has revealed the similarities that have taken her off the sets. Also Carmen Borrego, has joined these anecdotes, confessing that she had also had some resemblance to another.

“They confused me with María Jiménez in a cafeteria,” said the collaborator of ‘Viva la vida’. After saying this, José Antonio Avilés drew a new resemblance to Terelu’s sister, assuring that he has always thought that she resembles María del Monte, although none of his companions has approved this resemblance.