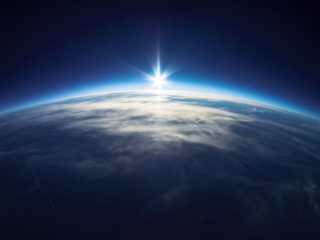 Apparently, through a complex mechanism, climate change is also causing an increased depletion of ozone over the Arctic. This is what researchers from the Alfred Wegener Institute in Bremerhaven report in the science magazine Nature Communications. During the “Mosaic” expedition in spring 2020, a record ozone loss was recorded over the Arctic. “A comprehensive analysis has now shown that this was also the result of climate changes,” explained expedition leader Markus Rex.

The study of Nature Communications show that, despite the worldwide ban on ozone-destroying substances, further increasing ozone losses in the Arctic polar vortex can be expected by the end of the 21st century if climate change continues unchecked. This can have consequences for people in Europe, North America and Asia: “Because the Arctic polar vortex drifts over Central Europe every now and then, so that in Germany too there can be a few days of reduced ozone layer in spring, which then increases during these periods UV radiation and can ultimately lead to sunburn and greater risk of skin cancer, “explained Rex.

The polar vortex is a low pressure area in the stratosphere at an altitude of 15 to 50 kilometers that forms over the Arctic every autumn and lasts for different lengths of time from winter to spring. The density of the ozone layer over the Arctic fluctuates over the course of the year and always reaches its lowest value in spring. In the spring of 2020, “Mosaic” researchers registered a record loss: around 95 percent of the ozone was destroyed at the altitude of the ozone maximum. The ozone layer thickness has been reduced by more than half – although the concentration of ozone-destroying substances has been falling since the turn of the millennium.

The team around AWI scientists Peter von der Gathen and Markus Rex and Ross Salawitch from the University of Maryland estimated the ozone depletion in the Arctic polar vortex by 2100 based on computer models. “In order for ozone to break down in the Arctic, the stratosphere in the area of ​​the ozone layer has to cool down considerably,” explained von der Gathen.

In general, there are irregularly warm and sometimes cold stratospheric winters in the polar vortex – the analysis of meteorological data from the last 56 years shows, however, a trend towards lower temperatures in the cold stratospheric winters. This goes hand in hand with increasing ozone losses. The evaluation of the models clearly shows that the trend is part of climate change.

The complex mechanism behind this is at least partially known, according to the AWI: The same gases that lead to global warming on the earth’s surface therefore promote a cooling of the higher air layers in the stratosphere. Presumably, changes in the wind systems in the course of climate change also contributed to the lower temperatures in the polar vortex.

According to the researchers, future chemical ozone losses in the Arctic will depend heavily on the amount of greenhouse gases emitted by the end of the century. With drastically reduced emissions, a decline in ozone losses can be expected soon and thereafter. “If we do not reduce our greenhouse gas emissions quickly and comprehensively, arctic ozone loss could get worse and worse by the end of the current century, despite the great success of the Montreal Protocol, instead of following the generally expected recovery,” said Rex.

The Montreal Protocol is considered a milestone in environmental protection. On September 16, 1987, 24 nations – including Germany – signed an agreement to save the ozone layer in Montreal, Canada. They pledged to first curb the production of chlorofluorocarbons (CFCs) and other ozone-depleting substances and finally to stop them completely. Until then, CFCs had been used en masse for decades as propellants in sprays, as coolants or in foam production. A thinner ozone layer means that more unfiltered UV light penetrates the earth, which can lead to eye and skin damage and even skin cancer.

Such substances are still abundant in the atmosphere because they are only slowly broken down. “The concentrations of these substances in the polar vortex still increased up to the year 2000,” explained von der Gathen. “They’ve been falling since then and are now 90 percent of their maximum.” In the Antarctic, researchers hope that the ozone hole will slowly close. In 2019, due to special meteorological conditions, it was smaller than it had been for around 30 years. In the following year, however, one of the largest and deepest ozone holes in the past 15 years was over the Antarctic, as the Atmosphere Monitoring Service (CAMS) reported in October.

Experts speak of an ozone hole when the protective layer becomes so thin that it falls below the normal value by around a third. In spring 2020, research groups discovered an ozone hole over the Arctic for the first time. “At the moment it is a real ozone hole, as we have never seen it over the Arctic, but as we know it from Antarctica. This is a very special event,” said Martin Dameris from the DLR Institute for Atmospheric Physics said.

It has been known for some time that chlorofluorocarbons (CFCs) not only damage the ozone layer, but also contribute to the climate crisis: They act as greenhouse gases. According to a study presented in 2020, the release of the substances in the second half of the 20th century caused about a third of the global temperature increase measured up to 2005. In the Arctic, half of the warming and ice loss during this time was due to the ozone killers, researchers reported in the specialist magazine Nature Climate Change.

If the newly gained knowledge is confirmed, CFCs contribute significantly to ozone losses in the Arctic polar vortex in two ways – directly in the stratosphere and through their climate impact. The current study was based on measurements taken during the “Mosaic” expedition, which lasted around a year. The research ship “Polarstern” drifted through the Arctic Ocean, docked on a huge ice floe.