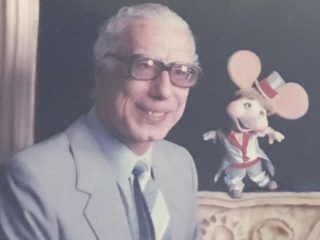 The creator of the Children’s Day in Argentina he died on Tuesday at the age of 86. It’s about the entrepreneur Enrique Mario Trucco, who founded the Truquito toy store and promoted at the end of the 1950s that children have a specific date to receive gifts.

The news was posted by his grandson Gino Cingolani, who also shared a tender image of his grandfather with a Topo Gigio doll. “He died at home and next to his wife, his children and grandchildren. That in this age is a gigantic privilege. He would have liked to be remembered like this, smiling and with a toy next to him”, He highlighted on his Twitter account.

In 2017, Gino put an audio of his grandfather on the air of the radio show Tonight Tonight (Delta) -driven by Hernán Panessi- where he explained how Children’s Day came about. “We got together with a group not only of toy makers, but of people who were dedicated to selling candy and everything related to boys, and we formed a commission. We went to the post office and had a stamp printed with Children’s Day, August 7, 1959″ Said Trucco.

Later, he added: “I was in charge of organizing the festivals. So I made sure that all the artists who worked for the boys committed to acting. They were festivals of more than a thousand people in the Opera theater, in the Great Rex. That’s where Pinky slapped me because she wanted to enter (on stage) earlier and I told her to enter later.”.

Despite dedicating himself to the toy industry, Enrique created this special date with solidarity and non-commercial intentions. A proposal that was evidenced in the donations to schools, hospitals and orphanages. It was only when the Argentine Chamber of the Toy Industry got involved that it began to become massive for a more commercial purpose.

// Unusual: they built an international bridge with rubber bands for the illegal crossing of the Bermejo river

On the other hand, the businessman’s grandson gave some colored details about his grandfather’s work. “The idea was to spread the word to the participating brands, but things were donated for the children in the hospitals and a festival was also held on Corrientes Street with José ‘Pepitito’ Marrone and other figures. Olmedo and Porcel were there, a lot of people from the show went by ”, he revealed.

In addition, Gino said that his family participated in the Children’s Day dinner, which was attended by many celebrities. “My grandfather sat at the head table with Mirtha Legrand and Alberto Olmedo”, He assured.

While Children’s Day is celebrated in Argentina on the third Sunday in August, the date changes in other countries in the region. On the other hand, every 20 November the International Day of Children’s Rights is celebrated around the world.