“Enters the cell without destroying it”: They create a quantum microscope capable of capturing biological structures never seen before 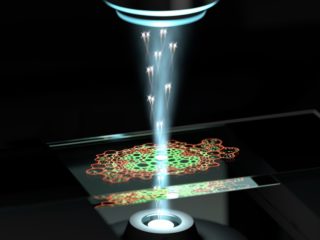 Scientists from the University of Queensland (Australia) and German researchers have succeeded in creating a quantum microscope capable of discerning cellular structures that were previously beyond the reach of human technology. The details of the advance were published this Wednesday in the journal Nature.

The operation of the device is based on the science of quantum entanglement, a phenomenon that was described by Albert Einstein as “spooky remote interactions“, because the apparent remote interaction between two particles seemed to be incompatible with his theory of relativity.

The newly conceived device differs from conventional light microscopes, which use lasers that are billions of times brighter than the Sun itself, due to which fragile biological structures such as human cells survive only for a short time under this lighting.

The microscope’s quantum entanglement “provides 35 percent improved clarity without destroying the cell, allowing us to see tiny biological structures that would otherwise be invisible “, Explain Professor Warwick Bowen, from the Quantum Optics Laboratory at the University of Queensland and one of the creators of the mechanism.

Likewise, the experts consider that the greatest achievement of the new method consists in overcoming the so-called ‘hard barrier‘of the conventional light microscope that cannot access the interior of living cells.

In what areas could it be applied?

The construction of this quantum microscope can have implications in the realm of biotechnology, as well as in a wide range of areas ranging from navigation to medical visualization.

“This advancement will lead to all kinds of new technologies, from better navigation systems to better MRI machines,” Bowen emphasized.

Meanwhile, the Australian roadmap in this field of technology places quantum sensors as sources that incentivize a new wave of technological innovation in healthcare, engineering and transportation.