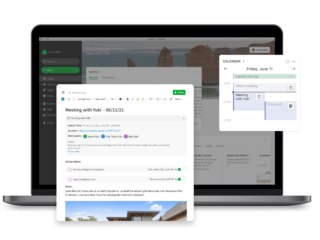 On Wednesday Evenote introduced the new subscription models announced a good two weeks ago. The changes are smaller than some might have expected. The subscription levels have been given new names and a high-priced level has been added. It also introduces some new features; most of them are already known to many users due to previous beta and early access versions.

While the overview page (home dashboard) presented in January with pinned notes, quick accesses and widgets and the extended task lists is already known, there is a new option to integrate one or more (depending on the subscription) Google calendar accounts to share appointments and notes to link. Other calendars such as Outlook / Exchange or CalDAV are not supported. Although the new features are generally available to all users, individual functions and adjustments depend on the subscription.

The new subscription levels in detail:

Otherwise nothing changes. The free version has just been given a new name; the device limit (a maximum of two including web browser), the upload limit (60 Mbytes per month) and the maximum note size of 25 Mbytes remain unchanged. The free version allows the use of the dashboard, but not its adaptation. Tasklists are also supported, but without reminders and markings.

The previous premium subscription for just under 7 euros per month or around 60 euros for annual payments is only slightly devalued by name. It is now called “Personal”, contains the new functions such as task lists and the connection to a single Google calendar and retains all premium functions (for example searching in PDFs), the price and the previously applicable limits (10 GByte upload / month , maximum 200 Mbyte notes). The dashboard and task list offer additional options. According to the manufacturer, there is no need for premium users to do anything except update the client; the changeover takes place automatically.

Evernote has introduced another level above the personal subscription: the “Professional” subscription costs 8.99 euros per month or 89.99 euros per year. In addition to the functionality of Evernote Personal, it offers assignable tasks, the integration of multiple Google calendar accounts, more options for dashboard customization, PDF export of notes and a search function expanded by Boolean operators. A connection to Slack or teams is also promised. It is not yet clear what exactly it looks like. In addition, the monthly upload quota doubles to 20 GB.

It is to be hoped that Evernote will not try in the future in a similarly penetrating way to motivate personal subscribers to upgrade to a professional with inline advertising, as they have done so far with users of the free basic version.

The highest subscription level, previously known as “Evernote Business”, will also remain unchanged in terms of functionality and price and will only be given a new name. It will be called “Evernote Teams” in the future.

Evernote had announced changes to the subscription model in an email, but did not reveal any details – except that there was no price increase. Apparently, the company has learned from the sometimes violent user reactions to the significant price increase a good five years ago and the subsequent further curtailment of the free version.

No return from “plus”

The vague announcement had aroused the hope of the return of the Plus subscription, which was discontinued in 2018, for just under 4 euros per month (29.99 euros annually) or a similarly cheap intermediate step between Free and Personal. Unfortunately, the hope was not fulfilled. If the restrictions of Evernote Free are too great for you, only the personal subscription (formerly “Premium”) remains.

When we asked whether a lower-priced subscription level between Free and Personal is planned for the future, the company replied: “We think that the functions and possibilities of Evernote are well divided in the four existing subscription plans, that they cover the needs of our customers well and that they are simple are to be understood “. Translation marketing speech-German: No!

All-rounder instead of a note-taking program

The changes make two things clear: On the one hand, Evernote wants to move from a note and document collection program to an all-round productivity tool, albeit not entirely consistently. The program is intended to replace a simpler task planner, but on the other hand does not offer its own appointment calendar function, but integrates it externally. In itself it is not wrong if other calendar services than just that of Google were also supported.

On the other hand, the Californian company is sticking to its high-price policy and is even underlining it with an additional, even more expensive subscription level. Instead of competing on price with cheap and partly free alternatives such as OneNote, Joplin, Obsidian, Notion or Bear, one tries to stand out from these with more functionality.

But even if Evernote has not actually increased its prices or cut existing subscription versions this time, many users are likely to be disappointed. One had not only hoped for the return of a cheaper Plus version, but above all for the long-promised subsequent delivery of many functions that were no longer available with Version 10, such as folder monitoring.