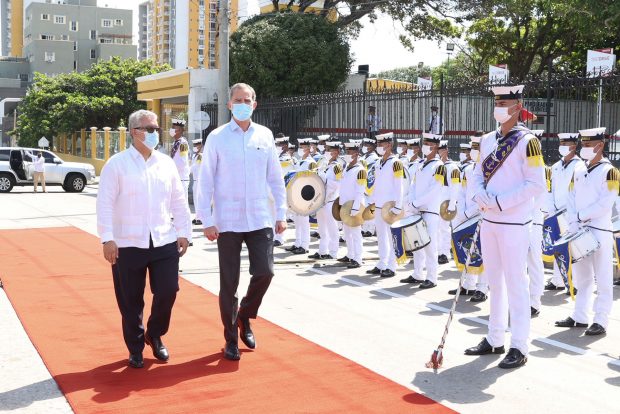 New international displacement for the King Philip. After the state trip with Queen Letizia to Sweden last week, this time, the monarch has moved to a much warmer destination. Felipe VI traveled to Colombia this Wednesday afternoon to participate in the biannual congress World Law Congress, an appointment that organizes the World Jurist Association and in which more than two hundred speakers from around the world participate to analyze and debate issues such as the rule of law and its impact on the development of nations. An important international event that the monarch did not want to miss, which was his first official visit to Barranquilla.

Don Felipe arrived on November 30 at the Ernesto Cortissoz-Soledad-Barranquilla International Airport, where he was received with all honors by the Vice President and Chancellor Marta Lucía Ramírez, the Spanish Ambassador in Colombia and the Colombian Ambassador in Madrid.

These days in the native city of the singer Shakira, the monarch has stayed in one of the most prominent places in Barranquilla, Casa Catinchi, where he has also held some meetings. This historic building is located in the center of the city and originally belonged to an important family from Puerto Rico, although now it has become a meeting place for authorities.

Dressed casually, with dark pants and a linen shirt -perfect for city temperatures-, The King has held a series of meetings and has also reviewed the troops together with Iván Duque. However, beyond the official issues, the monarch has also had the opportunity to enjoy some of the cultural aspects of Barranquilla, in addition to the gastronomy.

This digital has been able to know exclusively some of the details of the lunch that Iván Duque has offered to Felipe VI and has commented with the person in charge of preparing the Caribbean menu that the monarch has tasted. Felipe VI has enjoyed the local gastronomy in the restaurant Mango stick, captained by Alex Quessep.

As a starter, Don Felipe has tried the hayaquita de cordero, topped with green olives, quail egg and confit tomato. The main course consisted of a seasonal fish fillet, bathed in coconut milk with turkey in chili, a traditional pasta from the Montes de María, made with sweet chili and chivato chili. To accompany this dish, a timbale cassava with coastal cheese and chives, as well as a cabbage leaf vegetable packet, stuffed with stamina salad, tomato, cucumber and coriander. For dessert, a puff pastry cookie with coconut cream, titoté and salted caramel was served. The ‘titoté’ is a traditional preparation of the Afro-Caribbean cuisine, obtained from the reduction of the coconut, until its natural caramel is extracted. All these dishes have been made 100% with local products and constitute a broad representation of the typical Colombian Caribbean stew.

As LOOK has learned, Don Felipe really enjoyed the menu, in fact, he ate each of the preparations completely, and also thatI wanted to congratulate chef Alex Quessep for his work and told him that he liked to try the most typical foods of each of the places he visited.

During lunch offered by Ivan duqueBoth the President and the King have made speeches. The monarch thanked all the hospitality he has received in these days and commented that he was happy to return to Colombia. A country that has highlighted its open character and its ability to welcome people from all over the world with open arms, to make their home and integrate into its culture.

After lunch, the King and the President visited the new Pumarejo bridge, where he inaugurated the monument of the Word Peace & Liberty Award, as well as a meeting with the Spanish community in the country.

It is not the first time that the King visits Colombia, but he was already last September in the city of Cartagena, in the acts of the 75th anniversary of the creation of

Force of Measures Against Mines (MCM) of the Spanish Navy. Before this, he has visited the country on several occasions both during his time as Prince of Asturias and afterwards. In fact, his first official trip in 1983 was precisely to Cartagena de Indias, where he participated in the events for the 450th anniversary of the founding of the city by the Spanish Pedro de Heredia.