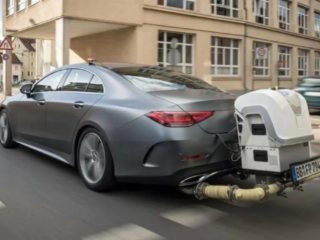 In the dispute over emission limits for cars of the Euro 6 standard, Germany has to prepare for defeat at the European Court of Justice. The responsible ECJ expert recommended the judges today to dismiss the German objection to a judgment of the first instance. This involves setting limit values ​​for nitrogen oxide after the Dieselgate scandal. (Cases C-177/19, C-178/19, C-179/19)

In 2018, the EU court ruled that the EU Commission wrongly relaxed these limit values ​​with the introduction of measurements in practical driving operations (RDE). The Brussels authority wanted to take into account inaccuracies in the conversion with the so-called type approval regulation. For example, for a Euro 6 limit of 80 milligrams per kilometer, the limit for RDE tests was temporarily set to 168 milligrams and then to 120 milligrams (so-called “conformity factor”).

The cities of Paris, Brussels and Madrid resisted, seeing their efforts to clean air being impaired. You got right before the EU court. Against this, however, Germany and Hungary appealed and took action before the ECJ. Its appraiser Michal Bobek now recommends dismissing the appeal.

In his view, the cities’ action against the Commission’s amending regulation was legally admissible. In terms of content, Bobek explains that the emission limit values ​​are an essential element in the type approval regulation. The Commission cannot change this independently, but only the authors of the regulation, i.e. the EU Parliament and the Council of Member States. The Commission lacks the power. The ECJ does not always follow its experts, but often. The verdict should fall in a few weeks.