Home
News
ExoMars Space Orbiter: There are (so far) no signs of life on Mars

ExoMars Space Orbiter: There are (so far) no signs of life on Mars 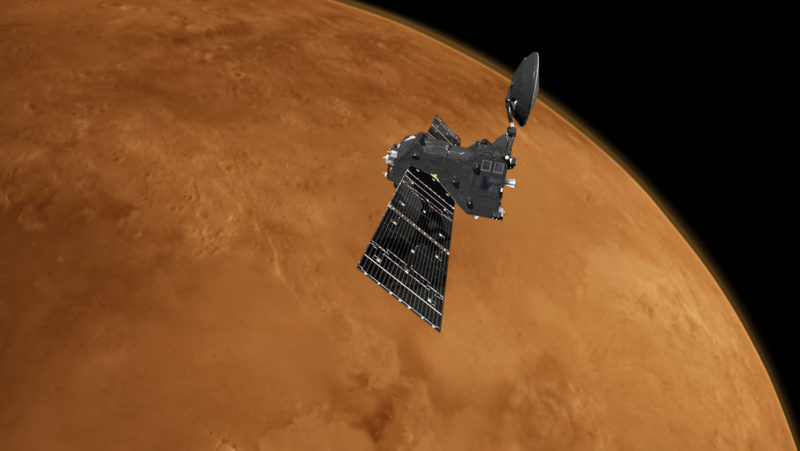 The gas-tracking team of the Russian-European space program ExoMars has so far not found signs that indicate the presence of life on Mars. ad this week the European Space Agency (ESA).

The search carried out by the Trace Gas Orbiter has focused on four biomarkers that could indicate the presence of life on the red planet. These are gases: ethane, ethylene, phosphine and, above all, methane, which on Earth is produced by living beings or by geological activity.

According to data obtained by the highly sensitive orbiter instruments, there are no significant concentrations of methane in the atmosphere of Mars. “No signs of that gas have been found, suggesting that the amount of methane on Mars is probably even less to the previous estimations “, specified the researcher Franck Montmessin.

Our #Exomars@ESA_TGO has set new upper limits on biomarker gases methane, ethane, ethylene and phosphine in the atmosphere of #Mars, finding very little evidence for their existence 🔎https://t.co/ugHrVr7WPLpic.twitter.com/Cj9so0U4m5

Scientists estimate that in some areas of Mars there would be methane in concentrations of less than 0.05 ppbv, and more likely 0.02 ppbv. For reference, the presence of this gas in the Earth’s atmosphere is around 2,000 ppbv. Nor was anything found when looking for signs of this compound in the area where the Curiosity rover is located, despite the fact that the NASA vehicle had previously reported a presumed presence of methane at the site.

“Curiosity makes measurements right on the surface of Mars, while the orbiter takes measurements a few kilometers higher. Thus, the difference between these two findings could be explained by some methane trapped in the lower atmosphere or in the vicinity of the rover. “Montmessin explained.

On the other hand, the ESA probe also detected very low levels of ethane and ethylene, two short-lived molecules that are supposed to form after sunlight breaks down methane. Y no significant trace of phosphine was found, a gas of biological origin that last month aroused intrigue when it was detected on Venus.

Scientists working at ExoMars intend to move forward with their goal of searching for signs of life on Mars, so they plan to complete their measurements with those of the Rosalind Franklin rover, which will be received in 2022.