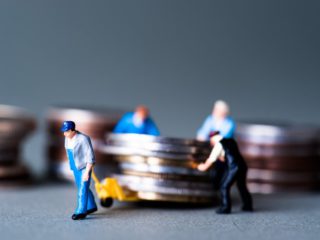 Salaries are taboo among colleagues, because employers often forbid talking about them. They want to prevent high wage claims by avoiding one of them knowing what his colleague deserves. This harms employers, says sociology professor Stefan Liebig, “because transparency in pay and fairness in salary negotiations lead to higher motivation”. Liebig suspects that a fair salary has a very central role in commitment, especially for computer scientists and engineers.

Stefan Liebig is professor of sociology at the Free University of Berlin and a member of the scientific board of the German Institute for Economic Research DIW. In his research he deals with the perception and evaluation of social inequalities.

Mr. Liebig, colleagues usually don’t talk about salary. Why not?

Because some employers expressly forbid this.

Although the law on wage transparency has been in place for several years, which grants employees the right to know what their colleague earns?

I suspect that there are still internal regulations in some companies that say that the salary cannot be discussed. We know from studies before the law was introduced in 2017 that around a third know the level of their colleagues’ income and two thirds do not. The Wage Transparency Act will presumably not have shifted this ratio significantly.

If we know what the colleague earns, do we compare hers with our income?

We compare ourselves with people from the company and external people who are equal to us. The criteria for this are, for example, age, education and gender. With this knowledge we judge whether our own salary is appropriate or not. Behind this comparison lies our need for justice. We humans have a central and strong sense of justice. The central question when assessing whether a salary is fair is always: Will my commitment to the company be adequately rewarded? Those who do a lot should get a lot, those who do little should get a lot. This standard guides us in the assessment and it is particularly used in the world of work.

What is the consequence of feeling that your own salary is unfair?

A feeling of injustice therefore has an impact on work performance.

Yes, and typically in creative jobs like those of engineers and computer scientists. They should be innovative, get involved and not do the job. The expectation of them is that they will develop something new. That doesn’t work with regulations, the motivation has to come from within. That is why I suspect that in these two professional groups in particular, the fairness of income has a very central role in engagement. Also precisely because there is a special job market situation for computer scientists. They are coveted and therefore the pressure on their employers to pay fairly is significantly higher than in other professional groups. Fair salaries help to keep them and encourage them to be innovative and committed in the company.

If companies forbid their employees to talk to each other about salaries, are they harming themselves?

Yes, but not without reason. They want to prevent the employees from making high wage demands because of their knowledge of the salaries of higher-paid colleagues. The feeling of injustice among their employees due to non-transparent salaries obviously bother some employers less than higher personnel expenses. Since salaries are taboo among colleagues as a topic, the companies open the door to wild income speculation.

To avoid this, should companies disclose their employees’ salaries internally?

It is much more important that the rules of remuneration and negotiations about one’s own salary are perceived as fair. It is crucial to clearly justify salary differences and to make the salary negotiations fair. In tariff systems there are certain criteria as to who is paid when and according to which pay level. At the moment when companies no longer resort to such systems for remuneration, they have to create the legitimacy of income and income differentials themselves. A tariff system relieves companies in justifying different salaries. It’s easy, but not very helpful.

Does the feeling of being treated unfairly arise from non-transparent salaries?

That is certainly a cause. Many studies have shown that if salary negotiations are conducted according to clear rules and the reasons for a certain level of salary are clearly communicated, then salaries that were perceived as unfair under other conditions are also considered to be fair. Procedural justice is therefore more important to people than distributive justice.

How is that expressed?

If the employees feel that they have been treated unfairly during the salary negotiation or by their superiors, this has a much greater negative effect than if they earn 200 euros less than their colleague. In many studies, workers were more willing to accept lower incomes if they felt that the procedure that led to the determination of the income was fair. Transparency and clear rules in salary negotiations are a prerequisite for fairness in the company and crucial for employee motivation.