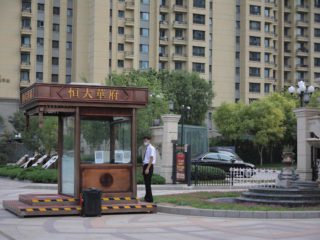 Beijing, Sep 14 (EFE) .- The Chinese real estate giant Evergrande, whose debt amounts to 305,000 million dollars, warned today of the risk of entering an insolvency process due to the fault of two of its subsidiaries, which caused a new collapse of its actions and increased fears that its fall could have consequences for the banking system.

The company’s shares on the Hong Kong Stock Exchange today fell by more than 11%, accentuating a typical trend from about the last year, a period in which Evergrande has lost more than 80% of its market value.

A group of investors protested on Monday in the lobby of the headquarters of the real estate multinational, in the city of Shenzhen (south), hoping to protect their interests against the possible bankruptcy of the company.

PROBLEMS COME FROM BEHIND

The Evergrande group, founded in 1996, benefited from the migratory wave to the cities and the extensions of real estate property rights in the Asian country and in 2009 it began to be listed on the Hong Kong stock exchange, where it performed well during the next ten years.

As a result of the growth of the company, its founder, Xu Jiayin, became the richest man in China with a fortune valued at 42.5 billion dollars according to Forbes at the end of 2017, the year in which the market value of the shares Evergrande also reached its peak.

However, the success of the group hid a huge debt with which it had covered its expansion to other sectors such as health services, electric vehicles or even sports (in 2010 it took control of Guangzhou FC, one of the main teams football team).

The China in which Evergrande had flourished had changed: when the company was founded in 1996, China’s urban population represented 29% of the total and in 2017 it was already 57%, still with room for growth but not at the frenetic pace of the previous two decades.

In August of last year and to control the rising price of housing and limit the capital attracted by the real estate sector, the Chinese government announced the policy of “three red lines”: if a developer does not meet certain requirements in its ratio between debts and assets and their leverage, the authorities would limit their access to credit.