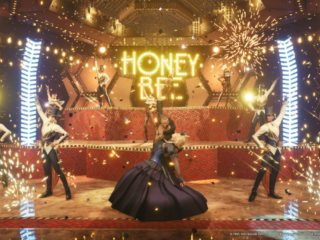 The Honeybee Inn portion of Final Fantasy 7 has been iconic since the original video game and couldn’t be missing from the remake. The developers decided introduce some changes to make it more memorable, festive and joyful … However, it is possible that some of those changes were “too cheerful” for the age rating.

In a interview posted by Square Enix with the game’s co-director, Motomu Toriyama, it claims that Honeybee Inn’s choreography from Final Fantasy 7 Remake contained originally a pole dance scene. Although at least one filming was made to include it, it was finally discarded.

“For the scene, we commissioned a team of professional dancers […] They proposed changing the concept and choreography for each section of the dance. In fact, we went through multiple recordings and corrections when making the scene. Initially, for example, a pole dancing scene was included, which meant that filming began on an elaborate set. We decided to remove that part due to the impact on the rating“.

Toriyama tells how the team wanted to change the Honeybee Inn sequence for Final Fantasy Remake and so on. give fans of the original title the show they’ve been waiting for, and at the same time make the event more than a celebration. He came up with the idea of ​​creating a musical number on stage as a central attraction, taking inspiration from traditional Parisian cabaret shows.

“Considering how famous cross-dressing was in the original Final Fantasy VII, we were aware that people would have high expectations for the remake.“, He said. “We knew we had to do it in a way that lived up to those expectations, but with modern sensibilities in mind.“.

Throughout the development of this scene other changes took place. For example, Toriyama said that Cloud and Andrea originally had a longer dialogue section that had to be trimmed to fit the music. Another idea was for Andrea to meet Cloud at a bathhouse and give him a massage in a scene that would have been a little closer to the original.

Toriyama says that more scenes in the remake sequels could differ significantly from the original and that players should look to the Honeybee sequence as a good example of how Square Enix developers could change things.

Final Fantasy 7 Remake Intergrade is out now for PS5.