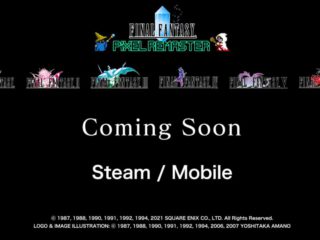 In the absence of Final Fantasy XVI, Square Enix Presents has not put aside its role-playing saga. The Japanese company announced during its E3 2021 conference that it is working on Final Fantasy Pixel Remaster, a series of revamped 2D versions of the first six video games in the series. The games have been announced for iOS and Android mobile devices, as well as for PC, via Steam. Nothing has been said about a hypothetical version of consoles, so at times these are the only confirmed platforms. The games are as follows:

Below you can see the official teaser trailer.

The saga looks to the future

After the release of Final Fantasy VII Remake Intergrade, the version optimized for PS5, we have also been able to enjoy the first and only paid expansion. INTERMission puts us in the shoes of Yuffie, the young thief that in the classic we could recruit, although she was not a mandatory character, like Vincent. Square Enix is ​​also working on the second part, which has not yet been officially shown, although the study claims that the development is going from strength to strength.

As for Final Fantasy XVI, it is a temporary exclusive to PlayStation 5, so it could be released on other platforms later. Be that as it may, the title is developed by the same Final Fantasy XIV team, although this time it will not be an online title. With an action-oriented real-time combat system, the next installment will take us to a world in which crystals play a very important role. Thanks to them, the inhabitants of the world live comfortably, until war breaks out. It does not have a release date yet.