First rescue in the Mediterranean of the ‘Geo Barents’: “We are here to save you. Everything is going to be fine “ 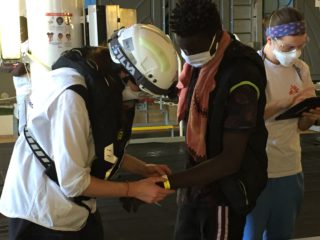 With hugs, dances and some tears, the 26 young people saved by Doctors Without Borders when they were adrift in the central Mediterranean, in a small blue wooden boat with a broken engine, celebrated their rescue. After 10 hours sailing, they received with relief the message from the mission’s human rights officer: “We are here to save you. Everything is going to be fine ”. It has been an operation against the clock in the presence of the Libyan Coast Guard, which has gone to the place when it has detected the maneuver and has threatened by radio the Geo Barents, the ship of the humanitarian organization that has been patrolling the rescue and rescue zone (SAR) off the coast of Libya for 10 days.

The boat was found this Thursday 44 nautical miles off Sabratah, after a busy morning in which several notices from the NGO have arrived Alarm Phone of possible boats in distress and information from the NGO Volunteer Pilots of three interceptions by the Libyan Coast Guard, near the position of the Geo Barents. Among those rescued, from Mali, Ivory Coast, Guinea Conakry, Senegal, Sudan and the Gambia, there are 15 unaccompanied minors. In the first conversations they have had with the crew, they have said that they left at 4:00 in the morning (local time) and that they had not called anyone during the crossing because they feared being intercepted. In fact, when they saw the ship from a distance, they tried to avoid it because they feared it was Libyan, but one of the boys recognized the MSF logo because of the organization’s work in Mali and they turned around.

Everything went very fast. When the MSF ship is about to change course slightly, a member of the team thinks he has seen something to starboard, using the binoculars the confirmation has arrived: a small wooden boat full of people. Shortly after, Antonin Richard, leader of one of the rescue speedboats, gave the radio warning to the rest of the crew: “All MSF team ready for rescue.” The lifeguard team hastened to the changing room to change: waterproof pants, life jacket, helmet, goggles and gloves. Waiting for the green light, they have gathered on the landing access to the sides of the ship from where the two speedboats are lowered. After 10 days at sea in which they have trained hard, there has been a hug and they have wished each other “luck” before starting the operation.

At the same time, on the bridge, the head of the rescue team Anabel Montes and the head of the mission Barbara Deck have had a tense conversation with the Libyan Coast Guard who has requested information on the ship and has threatened MSF. This situation has generated tension among rescuers. Human rights officer Julie Melichar on the bow of one of the speedboats makes the first contact to reassure the migrants. “We are Doctors Without Borders, a humanitarian organization, we are here to help you. Everything is going to be fine ”, he says before beginning the delivery of the life jackets to pass them, one by one, to the boats and take them to the ship. Also ask if there are children, a pregnant woman to notify the medical team if necessary. Not this time. The expectant migrants follow the orders, once on the boats some make the symbol of victory.

“Welcome”. “Welcome aboard”, greets you Philippe Juliani, head of logistics for the Geo Barents, while helping them remove their lifejackets. Almost all of the rescued speak French, so he has been able to exchange a few words with them. “How’s it going?” “All good?” The medical team awaits them on the deck where they will be staying, to take their temperature and give them a mask. According to the first evaluation, they all appear stable and without potential signs of covid-19. Some gave off a strong fuel odor, possibly from engine leaks. In line they thanked, celebrated, high-fived. One of them knelt down and wept. “Everything is going to be fine. You are safe now, ”the crew repeated. Although the boat was full, they were not wet, they were barefoot, but they soon received a change of clothes. Before, they were registered with their age and country of origin. All received a red bracelet with a number, in addition, a yellow one if they are minors or a yellow one with a black stripe if they are unaccompanied minors.

Once registered, the rescued received a blue bag with clothes and food, containing a white T-shirt, gray cotton pants, a hat, socks, a blanket, energy food, a cup, water, juice and a small toiletry bag. After a while, they continue to clap their hands and open the food. Some people take out their mobile and take a picture.

The head of the mission, Barbara Deck, delivers a welcoming address, which is translated into French by Julie Melichar and into Arabic by Salah Dasuki, the cultural mediator. It is a first contact in which they reiterate that they are safe, offer them medical and psychological care. The speech ends with applause and it is time to leave them alone for an hour so that they can assimilate everything that has happened to them in the course of a day.

During the night the surveillance rounds will begin to make sure that everyone is well and if they need something they always have a reference person to contact. Starting tomorrow, they will also have a schedule to get up, shower, get some exercise, and eat.

Once the mission was completed, Antonin Richard was happy to have been able to carry out the rescue and that the Geo Barents do your job. “This is a search and rescue boat, we have been searching for 10 days, which is a lot, and I am happy to have been able to save these people.” However, he acknowledges that it is a bittersweet sensation. “It means that people are leaving Libya putting their lives at risk, but it is also good to be able to help people not drown in the Mediterranean and take them to a place where they can be safe.”

MSF has reported the rescue to the Libyan authorities, who have not responded, and has proceeded to do the same with those in Italy and Malta pending instructions to go to safe harbor. At the moment tonight the 26 migrants have taken shelter aboard the Geo Barents.