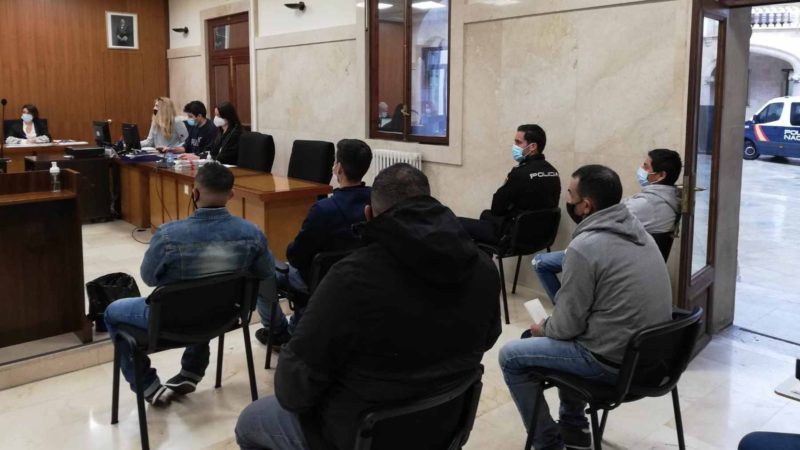 Five men have denied this Thursday in the Provincial Court of the Balearic Islands having trafficked cocaine and cannabis from a greengrocer run by one of them in the Palma neighborhood of La Soledad and from a flat. The Prosecutor’s Office asks for each of them eight years and nine months in jail.

The trial started this Friday at the Provincial Court of the Balearic Islands, for crimes against public health and belonging to a criminal group, reports the Europa Press agency.

The defendants are five men between 54 and 40 years of age, of Colombian and Ecuadorian nationalities. One of them was in search and capture and has been located and brought to trial.

Three of the defendants are directly linked to the greengrocer and another two to the flat. These two groups have denied knowing each other, although the Police saw them interact in various surveillance.

One of the defendants, in whose room cocaine worth more than 4,000 euros was found and a precision scale, has ensured that the drug was for own consumption.

“It was mine, for my consumption, not for distribution”, the defendant has insisted. According to his version, another person, outside of this cause, had given him the cocaine to sell in a nightclub, but he did not want to. However, he has not explained why he kept it then. “He left it to me for my consumption,” he has limited himself to pointing out.

When the Prosecutor’s Office pointed out that it was a very large quantity of drug for his own use, the man stated that it was given to him “so that he could pay for it little by little.” He had no income and only worked occasional carpentry jobs: “I was in debt and I was going to start paying it off when I worked,” he said.

During various vigilances, the police saw him making passes to other people, exchanging tickets and small packages. After intercepting the buyers, they found drugs. According to the accused, all this “is a lie.”

Likewise, the man has assured that his brother-in-law, who is also accused of drug trafficking, he knew nothing about the cocaine he had hidden in his room. He has maintained the same version: “I have never trafficked drugs in my life, nor have I been in something like this in Colombia, much less did I think to come here to commit something illegal,” he said.

As for the owner of the greengrocer and two other people who worked there, they have refused to allow them to sell drugs from the premises. Police found several pieces of paper on the counter.

The Prosecutor’s Office maintains that the defendants used the greengrocer as a cover to sell drugs to third parties, camouflaging it with the customers who came to buy from the premises.

During a police surveillance, the agents were able to verify how drugs were sold in the greengrocer, by intercepting customers on their way out. In October 2020, the Police searched the premises and a home of the accused, where they found cocaine and supplies for the preparation of the drug.

In addition to the jail sentence, the prosecutor asks for each of the accused a fine of 9,300 euros. PFor two of the defendants, the Prosecutor’s Office also requests their expulsion from the national territory once they have served three-quarters of their prison sentence.

One of the defendants, without a criminal record, had requested international asylum protection in Spain.