For the freedom of Moroccan journalists Soulaiman Raissouni and Omar Radi 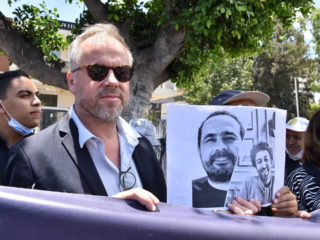 The undersigned, as friends of Morocco and Moroccans, demonstrate individually and regardless of their profession and political convictions to launch an appeal for the release of journalists Sulaiman Raissouni and Omar Radi, before the state The health of both defenders of freedom of opinion deteriorates further.

We are aware that the conjuncture of relations between Morocco and Spain lends itself to all kinds of demagogic instrumentalization and we do not want this document to contribute to deteriorate them even more.

We ask for the respect of the fundamental rights of the prisoners in accordance with Moroccan legislation and international conventions ratified by Morocco, in particular, regarding the presumption of innocence.

Souleiman Raissouni was arrested on May 22, 2020 and charged with “indecent assault with violence and confinement” of a man in 2018. The prosecutor based the accusation on an anonymous Facebook post.

Omar Radi was arrested on July 29, 2020 and accused of espionage and of attacking state security; He was also charged with rape. The only witness to the alleged violation testified in favor of Radi, being indicted several months later for complicity. Much of the evidence presented by Radi’s defense attorney has not been accepted by the prosecution.

Both Raissouni and Radi deny the charges. Their trials began several months after their arrests, but the proceedings have been postponed several times. Not only have they been detained throughout this time, they are held in solitary confinement and have limited contact with their families. The newspaper The world reported on June 16 that the trials of both had continued on the 15th in Raissouni’s absence due to his health, unable to concentrate and speak.

Raissouni and Radi are denied the fundamental right to remain free for the duration of the trial, a right enshrined in Moroccan law. Due to the denial of their right to remain free, combined with an unusually long period of imprisonment before the trial, they decided to go on a hunger strike to protest violations of their rights. Raissouni began his hunger strike on April 8, 2021 and Radi on April 9.

They both suffer from chronic diseases. According to Reporters Without Borders, Raissouni suffers from high blood pressure and Radi from asthma and Crohn’s disease. After 21 days of hunger strike, Omar Radi decided to resign due to his deteriorating health.

As for Soulaiman Raissouni, after more than 70 days on hunger strike, he is between life and death. He started this unlimited hunger strike to protest against his imprisonment, his conditions of detention and to regain his freedom in order to prepare for his trial. According to statements from his relatives, he has lost more than 32 kilos and has more and more health problems that put him at serious risk of death. In the name of human rights and the current Moroccan constitution that claims to guarantee the right to life, physical and moral integrity, the presumption of innocence, and a fair trial, a tragic outcome of this type must be avoided, which also it would seriously deteriorate the image that Morocco wants to give to the world.

We ask the monarch Mohamed VI himself and his government, and, in particular, the Ministers of Justice Mohamed Benabdelkader, and of the State in charge of Human Rights and Relations with Parliament Mustapha Ramid, to immediately release Soulaiman Raissouni and Omar Radi waiting for a fair trial.

Audije, Paco, journalist, correspondent and member of the Executive Committee of the International Federation of Journalists.

Ojeda-García, Raquel, Professor at the University of Granada.