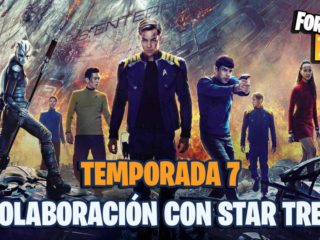 A new ARG/alternate reality game (alternate reality game) carried out by Epic Games throughout the afternoon of Sunday, June 6, 2021 gives clues about a possible collaboration with Star Trek during the Season 7 from Fortnite. Below we tell you all the details, but not before reminding you that we are in the last days of the Season 6 of Battle Pass from Fortnite Chapter 2, which will end on June 8:

Fortnite Season 7: clues suggest there will be a collaboration with Star Trek

This new alternate reality game consisted of solving all kinds of puzzles using tools such as audio file to spectrogram converters, and cryptography. But let’s go to what interests us: the solutions of several of these riddles give us clues about a possible collaboration with Star Trek. Specifically, these are the clues:

Passing the audio file from this videoby a spectrogram converter, you get the message “UNIVERSAL TRANSLATOR MALFUNCTION. FALLBACK AUDIO-DELTA ENCODING WITH 1-HIGH 0-LOW“. The” Universal Translator “, the Universal translator, is a device often used in Star Trek.

On the other hand, Another of the puzzle solutions resulted in a message accompanied by the emoji corresponding to the Vulcan greeting, popularized by Spock, Star Trek character.

Last but not least, in a live he did Donald Mustard, Creative Director at Epic Games, included many clues about the future of the game, including skins from Snake Eyes from G.I.Joe o de Kelsier, from Born of the Mist/Mistborn. Turns out that at the back of his room was a movie poster Star Trek: Into Darkness, of 2013. This would be the strongest track, taking into account the precedents, on the hypothetical arrival of Star Trek to Fortnite.

We remind you that Fortnite Chapter 2 Battle Pass Season 7 will arrive on Tuesday, June 8, 2021. Until then, we will have to wait to see if this is confirmed, or not.