Fortnite Season 7: the game will receive improved graphics on PC with patch 17.00 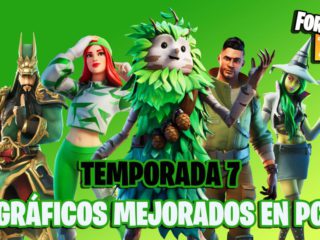 Through a blog entry on the official website of Fortnite, Epic Games has announced that its flagship video game will receive improved graphics in the version of PC with the arrival of patch 17.00, which is when the Season 7 the next June 8, 2021. Just below we tell you everything that has been announced in this regard:

Fortnite will receive improved graphics on PC with Season 7

The improvements that Fortnite Battle Royale will receive on PC with the start of Season 7 of Chapter 2 are, basically, new optimized effects, in addition to post-processing improvements and the shadow quality. For this, we will have to use the “Epic” graphics settings on a PC that has the power and the necessary components for it.

As of Fortnite Chapter 2 – Season 7, if we play with Epic quality presets, we will notice, both in the modo Battle Royale as in the Creative way, improvements to cloud and storm effects, in addition to the fluid and smoke simulation. Also post-processing effects on lens scatter and flare are improved, in addition to having a higher quality of shadows.

In other words: the improvements that received Fortnite in its versions of PlayStation 5 and Xbox Series X | S are moved to the PC version.

Epic Games also clarifies that due to these improvements, Epic quality settings will require higher specifications to function at optimal performance. High settings will become the equivalent of pre-17.00 Epic settings. Low and mid settings, as well as alpha performance mode, will remain the same with the 17.00 release..

With these new changes taking place in less than a week, these are the new minimum and recommended requirements of Fortnite on PC:

Requirements for the Epic quality preset