Fortnite: when does Season 6 end and Season 7 begin? 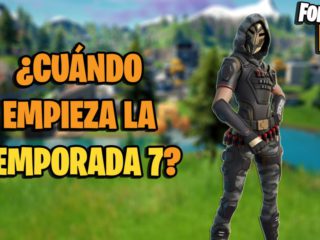 The Season 6 of Battle Pass from Fortnite Chapter 2 will end very soon, and will give way to the Season 7. In this news we tell you everything we know about it and we answer several of the most recurrent questions, such as “When does Fortnite Season 6 end?“, O “When does Season 7 start?“. You have all this information, and much more, just below:

Fortnite: when does Season 6 end?

We can consult this information at any time from within the video game itself. In the lower left corner of the Fortnite Battle Royale “Battle Pass” tab is the message “Chapter 2 – Season 6 through June 8.” Namely, Season 6 of Fortnite Chapter 2 will end on Tuesday, June 8, 2021, assuming there is no delay due to an unforeseen event.

Fortnite: when does Season 7 start?

Again, assuming there is no delay due to an unforeseen last minute, Season 7 of the Fortnite Chapter 2 Battle Pass will begin on Tuesday, June 8, 2021, with the arrival of patch 17.00 to the game. We will have to update Fortnite with this new patch to be able to play to the game and enjoy all the content that the new season will offer.

Fortnite: everything we know about Season 7

Using datamining techniques and tools after the arrival of the patch 16.50 from Fortnite Battle Royale, we have found lots of hints that Season 7 will be themed aliens and UFOs. Part by part:

We have found files related to a flying saucer in the game. This object, codename “AwfulDuck” (literally, “painful duck”) could mean “Alien Dish” (flying saucer). Digging a bit deeper into the code, we see interesting data, like that would have the ability to abduct the characters. Digging further, we see that they would work in a similar way to the hideouts of Season 2 of Chapter 2 of Fortnite, allowing us to teleport between various points of the map.

Let’s also take into account how much to Donald Mustard (Creative Director of Epic Games) he likes to give clues about the future of Fortnite. He was tweeting this on his personal account regarding the teaser trailer for The Eternals., from Marvel:

On the other hand, we have found subtle changes in the setting. Mysterious posters have begun to appear around Burning Sands which suggest that humanity and aliens must coexist peacefully. Also the cornfields of Cultivos Colosales have disappeared; this is surely related to one of the next Omen missions.

Last but not least, many audio files have been added in all languages ​​of the game Relating to several of the Omen missions. They are, in this order, from Black Helicopter, from Dennis, from Cabin boy, and of Big:

These audio recordings basically confirm what we have been telling you throughout the news: Season 7 is sure to bring aliens to the island.

This was confirmed on Wednesday, June 2, the day on which the ufo arrived on the island:

The short answer is no, there won’t be. Among the files in the game after patch 16.50 there are no encrypted packets with a size that suggests that there could be an event from the end of Season 6 of Fortnite Chapter 2. We assume, therefore, that there will be an event at the beginning of Season 7.