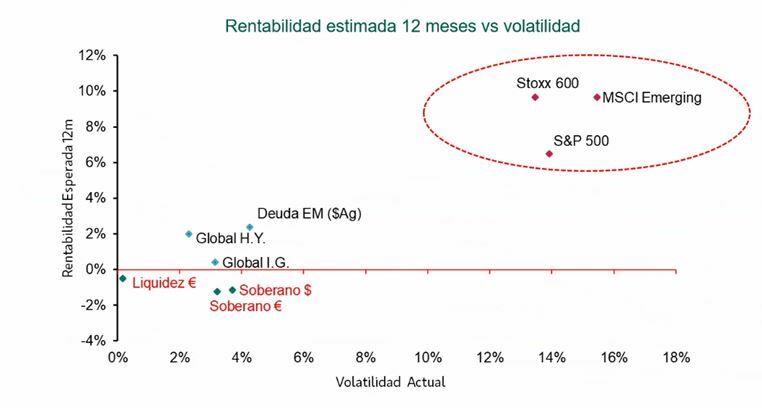 If this last year and a half has been characterized by something, since the pandemic began, it is because of the absolute success that monetary stimuli have meant – in terms of GDP, the five main central banks in the world have tripled their balance sheets – and fiscal , with an injection of 10 billion dollars that have left the “first drill” of QE that took place in 2008 to nothing. A few months in which pandemic and vaccines have been the protagonists. Something that will continue but with the focus elsewhere: if developed countries are torn between an additional booster dose, vaccination in emerging countries still remains a challenge “which makes us think that vaccination will progress more slowly and it seems difficult for us to think about a global immunization by next springSays Joan Bonet, director of market strategy at Banca March.

At the economic level, says this expert, the cycle is entering a much more mature phase with uneven growth by region. But are we facing an end of the cycle? If one looks at history, it is appreciated that the duration is usually much stronger than what we have accumulated with an average, since the 1950s, of 5 years. And if you zoom into the last 30 years, the average length of the cycles is 8 years. “This does not ensure anything but it does help us avoid the vertigo that one could have with such rapid recovery rates and can help us think about how much more could continue to grow.” A growth that will come from private consumption.

We are currently in the expansion phase, where growth is more moderate, markets are more volatile and ends up culminating in a rise in interest rates, something that for the moment looks far away. In the opinion of the entity, The US will grow by 5.9% this year, China will grow by 7.9% to reduce its growth to 5.6% in 2022 and in Spain “growth will be postponed to the next few years.”

An economy that has factors in its favor to continue growing, such as the tourism sector – which has recovered but has not yet reached pre-pandemic levels – unemployment, which has recovered pre-crisis levels but has one of the great challenges in the sector energetic. “Not only at a global or European level but also at the Spanish level where 75% of the energy is received from abroad and where the cost of electricity on disposable income is somewhat higher than 8%, above the European countries ”.

A challenge that joins another of the great risks that Banca Marcha sees: inflation. “Inflation will be temporary but this does not mean brief. If we look at the US, which is the most anticipated economy, we see that the price growth path will be slower. For the US we expect that the current levels of 5.3% will end the year at 4.5% to go to 2.2% at the end of June 2022. However, the European curve increases because the comparative base is worse and we are still waiting some positive upside surprise. We will return to 2.8% towards the end of the year and below 2% in June 2022 ”. A figure that central banks will continue to monitor, which have already anticipated a reduction in monthly bond purchases. The markets anticipate that the FED will raise rates at the end of 2022 while for Europe “futures discount that there will be no rate hike until December 2023 with rates around 0% at least until 2025”.

With this scenario, where are the opportunities? Government bonds and long-term strategies are no alternative at this time. Banca March believes that unlisted fixed income “presents higher returns with lower default rates than those presented by high-yield bonds and with higher recovery rates. In exchange for less liquidity we can have more profitability. In addition, the fixing of the debts of these assets is made at a variable rate, which makes it possible to avoid the issue of duration ”.

Regarding equities, Bonet acknowledges that investors “have gotten spoiled. In the last 11 months, the American stock market had not fallen 5% from maximum to minimum and that situation was something atypical that we had not seen since the 90s. The last cycles have been much longer and the return has been 4-5 times greater”. We approach a phase that is natural. “When cycles go from recovery to expansion and volatility increases, there are usually falls of more than 5%.”

In this expansion phase, where interest rates will eventually rise, banks do better. Additionally, says Bonet, it’s nice to have less cyclicality. “Before the summer, we observed that consumer discretionary companies, related to economic openness and travel, had done very well and we think that they have already done too well, so a good way to reduce beta is to reduce consumer discretionary in favor of the health sector. ”.

Also, when we talk about problems in supply chains like the ones we currently have “it is good to find companies with the ability to set price. And finally, it is okay to navigate the cycle by pacing but you have to be committed to two ideas that will have long-term growth: technology, which is always among the most profitable sectors while the cycle is in recovery (to avoid when it is in recession) and on the other. side issues related to green transition.