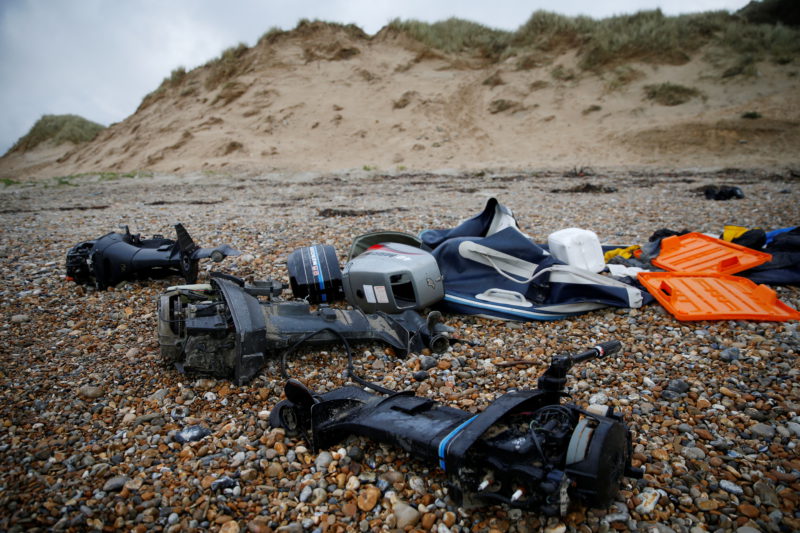 The death of at least 27 migrants, including women and minors, when the precarious boat in which they tried to reach the British coast capsized in the English Channel has caused a strong commotion in France, whose highest authorities have claimed more European efforts, and greater coordination to combat the smuggling networks that organize these illegal crossings. At the same time, the worst shipwreck in years in these shared waters threatens to re-strain the already difficult relations between Paris and London.

In a telephone conversation held last morning, French President Emmanuel Macron reminded British Prime Minister Boris Johnson of the “shared responsibility of France and the United Kingdom” in migration matters. By a 2003 agreement, the regional British border is located on the nearby French coast, whose agents are in charge of surveillance with funds contributed by London. In addition, the Gallic head of state let the premier Briton who hopes that “the British cooperate fully and refrain from instrumentalizing a dramatic situation for political purposes,” reported the Elysee on Thursday.

For his part, Johnson, who had declared shortly before that the efforts made by France to prevent the crossings “are not enough”, reiterated to Macron his proposal to carry out joint patrols on the French coast, a possibility that Paris has previously rejected for reasons of sovereignty, highlights the Agence France Presse.

The shipwreck on Wednesday has left a provisional balance of 27 deaths, including 17 men, seven women and three young people, probably adolescents (two boys and a girl of age yet to be specified), the Lille Prosecutor’s Office reported this Thursday. Two men suffering from hypothermia – a Somali and an Iraqi, according to the first information – managed to be rescued and their lives are not in danger, added the Prosecutor’s Office, which has opened an investigation for “helping to enter and reside irregularly”, “homicide involuntary ”and“ association of criminals ”, according to France Télévisions.

During the night, a fifth man suspected of belonging to the human trafficking network that would have organized the deadly sea crossing was also arrested, Interior Minister Gérald Darmanin confirmed on RTL on Thursday. According to him, the car of the last arrested man had a “German license plate” and he had bought the zodiacs in Germany. A fact that reinforces, according to Paris, his thesis that in the fight against irregular immigration and, above all, against the networks that organize the crossings, it requires the involvement of all neighboring countries.

“There are criminal organizations in the Netherlands, in Belgium, in Germany and England,” Darmanin recalled in this regard. Already the day before, Macron had asked “to accelerate the dismantling of criminal networks” together with those countries, as well as a greater effort from all over Europe, which must approve an “immediate reinforcement of Frontex media at the external borders of the EU” and, also, hold an “emergency meeting of European ministers concerned by the migration challenge,” he said in a statement.

So far this year, France says it has dismantled 44 smuggling networks, up from 23 in 2020, and has apprehended more than 1,500 smugglers along the northern coastline off the British coast.