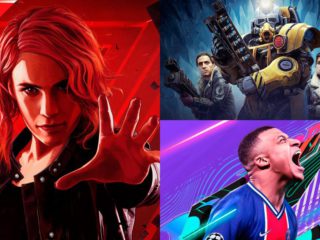 As every weekend we offer you a series of proposals to play during these days completely free of charge, among which we have to highlight nothing less than a great game like Control, which we can get from the Epic Games Store. But of course, there is more.

The best free games for PC, Steam and more in 2021

The best free games for Nintendo Switch in 2021

This same night the Eurocup starts with the opening match between Italy and Turkey, and with this football weekend being presented, there could be two proposals related to the beautiful game with two great simulators. On the one hand, the most relaxed but also more demanding and profound football of Football Manager 2021, and on the other, the most successful simulator on the market, which is obviously none other than FIFA 21. Let’s see our selection of five free games for these days:

One of the most popular survival games of recent times is once again enjoying a free game trial, this time thanks to the Free Days of Play on Xbox, on Microsoft consoles and on PC. The structure of the game is the one already known to everyone in the genre, with the peculiarity that we will share the universe both with dinosaurs and with certain technology that will allow us to collect resources, build structures, etc …

Try ARK: Survival Evolved for free on Xbox and PC

The weekly rotation of the Epic Games Store brings us this week neither more nor less than Control, the last game of the Finns of Remedy Entertainment. In this adventure by agent Jesse Fadden we will find a metroidvania structure with action, exploration, puzzles, supernatural powers and some memorable moments throughout approximately 15 hours of duration. A plot full of unknowns and questions completes one of the great games of Sam Lake and company, which we can download and stay forever from the Fortnite creators store.

Download Control for free from the Epic Games Store

Okay, it didn’t get off to the best possible start, but the reality is that Bethesda has managed to redirect this massive multiplayer set in its popular post-apocalyptic universe to make it an alternative to take into account. Through constant updates that have corrected bugs and added a multitude of content, the game has been able to take flight to achieve a very large and active community. We can give it a try thanks to Xbox Free Play Days.

Try Fallout 76 for free on Xbox and PC

Xbox Free Play Days are completed with a game just for soccer sick people, and it’s been many years since Sports Interactive has been fulfilling the wishes of fans of the beautiful game with an absolutely immense manager simulator in which to take into account a lot of variables, sports and management. Suffice it to say that many real teams use the game’s gigantic database for their daily work at the club, with that being all said …

Try Football Manager 2021 for free on Xbox and PC

To celebrate the start of the Eurocup from today, what better way than to do it with the football simulator par excellence. During this weekend we can enjoy a free game trial of FIFA 21, with all its content available, namely: Ultimate Team, Career Mode, Volta, etc … If it convinces us and we cannot wait for the arrival of FIFA 22, we can get it at a reduced price.