From Armani to Raph Lauren: the Tokyo Olympics in the sights of fashion 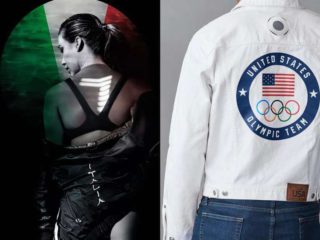 The uniforms of the world’s delegations were carefully designed by experts.

Armani will also dress the Paralympic athletes and Lauren those from her country. (Photos: @armaniexchange and @ralphlauren)

The Tokyo Olympics they are inaugurated on July 23, when the athletes of the world will march behind their flag bearers. And when they do, people will start commenting too about what they are wearing.

The Olympic clothing gives rise to many conversations on social networks, starting with the parade of nations that lasts for hours. The wait, which lasted a year due to the pandemic, has given enthusiasts extra time to reflect on what they love or hate. There is the Czech Republic with its traditional indigo block design and matching fans, which has already generated jokes. It follows the raucous neon blue umbrellas and rain boots of London 2012 and its striped ‘Beetlejuice’ jackets at Rio 2016.

The Israel’s selection has sheer nylon jackets with huge pockets, while Emporio Armani dressed the Italian team in sports outfits with a reinterpretation of Japan’s rising sun in the colors of the Italian flag: green, white and red. Liberia received a gift from designer Telfar Clemens, the sought-after Liberian-American who makes coveted handbags and who created uniforms for the first time.

Things used to be a lot easier for athletes in terms of fashion. In the beginning there was no parade or opening ceremony. Everyone wore what they wanted and used to walk with their sports equipment. “At first it wasn’t a big deal,” he said. David Wallechinksy, member of the board of directors and former president of the International Society of Olympic Historians. “People just came. If a team wanted to dress the same, they would. ”

Very early on, clothing was even optional during competitions, according to historians. Athletes used to compete naked in ancient Greece. In more modern times, parade uniforms often pay tribute to the host country, in addition to traditions, athletic feats, and patriotic fortresses. This year the pandemic has brought another element: masks.

Australia offers athletes a Sand colored bag with the names of the 320 Olympic medalists gold of the country. For the closing ceremony, the Canadian Olympic organizers have partnered with Levi’s to produce a ‘Canadian tuxedo’ jacket with graffiti motifs in the style of Japanese streets. “This is the gang that’s coming after you if you say you tried to watch (the Canadian series) ‘Schitt’s Creek’ but didn’t like it, ” New York Times culture commentator Dave Itzkoff tweeted about the model in April, several months after the jacket was unveiled along with other pieces from the Canadian delegation.

Alison Brown, host of the Olympic fan podcast Keep the Flame Alive, said dressing Olympic teams, including those competing in the Paralympic games, is not easy. “They have to fit all kinds of bodies. Think small gymnasts, muscular weightlifters, and towering basketball players. They have to express something about the country, honor the host, be serious enough for the solemnity of the occasion, but practical enough to be comfortable for hours standing in the heat, ” he said.

Brown is one of the fans of the Czech uniforms, made by Zuzana Osako in Prague. They include the mainstay of the team, a gymnast, in the design. Men will wear blue vests with white pants and the women blue blouses and white skirts. “They managed to mix elements of the Czech folk tradition, traditional Japanese indigo dyeing techniques, and pay homage to the great Czech gymnast. Vera Caslavska and keep the style wearable and comfortable for the heat, ” Brown said.

On jackets from Canada, he said: “I think I wore something similar in 1987. I wonder if anyone over 12 really wants to wear it.” Lucia Kinghorn, the vice president of design at Hudson’s Bay who helped create the Canadian uniforms and other Olympic models, is aware of the disparagement. “We have many more fans than detractors,” he said. “We are proud of the thoughtful design behind Team Canada clothing and happy that so many people are talking about it.”

Brown was also not impressed with the look of the United States team. Includes blue pants for the opening parade and white pants for the closing ceremony. “The United States has stayed with the same designer, Ralph Lauren, as it has for years, which has led to another yacht look. Yawn, ” he said. “It is also expected to be very hot in Tokyo. Jeans, a knit T-shirt, scarf, and jacket? Who wants to wear that in that heat and humidity? ”

The Japan’s uniforms date back to those worn by the Japanese delegation at the opening ceremony of the last Olympic games held in Tokyo in 1964. Back then they wore red jackets and white pants. This year the colors were reversed. “It’s in keeping with the many echoes that the organizers are including from 1964 ′,” Brown said.

Her favorite style for the parade so far is Mexico. The Mexican Olympic Committee opened a national vote to choose the style for the ceremony with three designs created by High Life. Winning design pays tribute to Oaxaca on a flap with bright colors. “The bag includes a floral lapel with traditional Zapotec embroidery. It’s so beautiful without looking like a costume, ” Brown said. The Embroideries were made by Oaxacan artisans, which makes each flap for the 150 bags that were made different and unique, said Jeannette News, High Life Marketing Director. The artisans, he said, “were very happy to be part of the project and that their designs and their work can have this worldwide exposure.”

Entire collections are for sale to the consumer, created from what the Olympians will wear at the opening ceremony. “It’s a great time for these brands to show their team spirit and innovation in new technologies,” said Ted Stafford, fashion director of the magazine. Men’s Health and market director of Esquire. “It’s the world stage and it sets the tone,” Stafford said. “It is more than a great fashion show.”