From confetti to exomondes – the national winner “Jugend forscht” was chosen 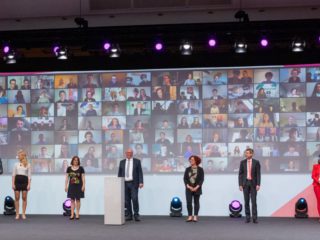 A “Löschigel” for the fire brigade, web programs against resistant germs, Exomonde and a study on flying confetti: The 56th “Jugend forscht” competition on Sunday in Heilbronn honored the best young researchers from Germany. The research results and discoveries could help make the world a little better, said Baden-Württemberg’s Prime Minister Winfried Kretschmann (Greens). “Our future depends on such ideas.”

169 young tinkerers with 113 research projects in the fields of work, biology, chemistry, geo and spatial sciences, mathematics / computer science, physics and technology qualified for the national finals. This year’s winners were only allowed to cheer on the screen: As with the presentations in recent days, the award ceremony due to the corona pandemic was broadcast as a live stream.

The most original work: the disappearance of the flowering flora

With computer programs, environmental projects and very tangible new products, the youngsters were able to convince the jury this year. Jakob Nolte from Hesse received the Chancellor’s Prize for the most original work: the 20-year-old proved that in the region around Laubach in Hesse over the past 130 years, up to 80 percent of the flowering plant flora has disappeared – Chancellor Angela Merkel (CDU ) the young researcher will also meet personally in September.

The 16-year-old Amon Schumann was delighted with the award from the Federal Minister of Education for the best interdisciplinary work. The Berliner has developed approaches to optimize traditional methods of weather data measurement. He uses weather balloons several times and can operate an extremely light probe with solar power.

With a kind of “Löschigel” Jan Heinemann (18) from Andernach (Rhineland-Palatinate) won the field of work. Its spike-like attachment for fire hoses can atomize water over a large area through the nozzles and thus make fire fighting more effective. “Anyone who has an idea must not give up, they have to be creative, have to improve and leave something there for the future,” said the new national winner at the award ceremony.

Chemistry and biology: density and internal structure and resistant germs

Chemistry national winner Nikola Ristic (18) from Leipzig (Saxony) wants to save his prize money of 2500 euros for studies, as he says. He optimized a computer program to calculate the density and internal structure of molecules and their cavities and to make them visible. Marik Müller (17) won the national title in the field of biology with a method that breaks down the antibiotic flfenicol before it gets into the environment. This reduces the risk of resistant germs developing, explained the young person from Potsdam.

Maize for the benefit of the soil, rare wild bees and protection against legionella and boxwood moth

Baden-Württemberg’s young tinkerers were represented at the national competition with ideas for replacing maize for the benefit of the soil, with new knowledge about rare wild bees in the Lake Constance region and with a project to protect against legionella and boxwood moth. In March, a total of 8 of 69 projects in the state competition qualified for the national finals of Germany’s best-known young talent competition.

Leonard Münchenbach and Leo Neff (both 17) from Emmendingen in Baden-Württemberg were successful again. You examined the flight behavior of confetti and thus convinced the jury. The new formula of the federal physics winners can be used to describe how quickly strips of paper rotate in free fall. You yourself say it was “sheer joke” and something that “really does not help anyone, except perhaps in the scattering of confetti cannons”.

Tobias Neidhart, the national winner in the field of technology, also comes from the southwest. The 18-year-old from Konstanz accelerated a special type of printer in which a viscous resin is exposed to UV light in order to cure it layer by layer.

“Jugend forscht” is Europe’s largest competition for young talent in mathematics, natural sciences and technology. In the past year, no projects were awarded due to the corona pandemic.