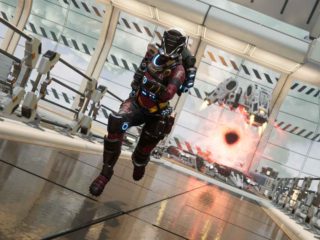 Lemnis Gate Bringing Pioneering 4D Gameplay and Thought-provoking Tactical Combat to PC and Consoles, Available Next August 3, 2021. Currently and for the simultaneous launch on PC, PlayStation®5, Xbox Series X | S, PlayStation®4 and Xbox One, players can pre-order the game from today with a 20% discount on the retail price, as well as the exclusive KARL operative and weapon skin, Mettle Mantis.

Unveiled during the PC Gaming Show, the latest trailer reveals more fascinating aspects of the game and shows the fast-paced action of the Tectonic Wells map, giving players a tantalizing preview of what they will find in the coming months.

Whether challenging opponents online or going head-to-head with friends with the command pass, players will need cunning, strategy and deft execution to succeed as they progressively advance through their plays, in exciting 1v1 and 2v2 matches.

Throughout five exciting rounds that take place in a 25-second time loop, players can select one of seven agents, all of them with unique abilities, and will have to deploy ingenious tactics that will produce effect and impact throughout. the match. In Lemnis Gate there is no room for favoritism, but it will be the mastery of the skills of each agent that will offer the best chance of victory.

Before launch, PC gamers around the world will have the opportunity to play the game during the upcoming open beta on Steam. This beta is the first contact for the general public to take on the game, thus offering a first look at the new and wacky strategies that will define Lemnis Gate.

Lemnis Gate is available with a 20% discount and an exclusive skin For a suggested retail price of € 16.79 on Steam, Windows Store, PlayStation Store and Xbox Store.