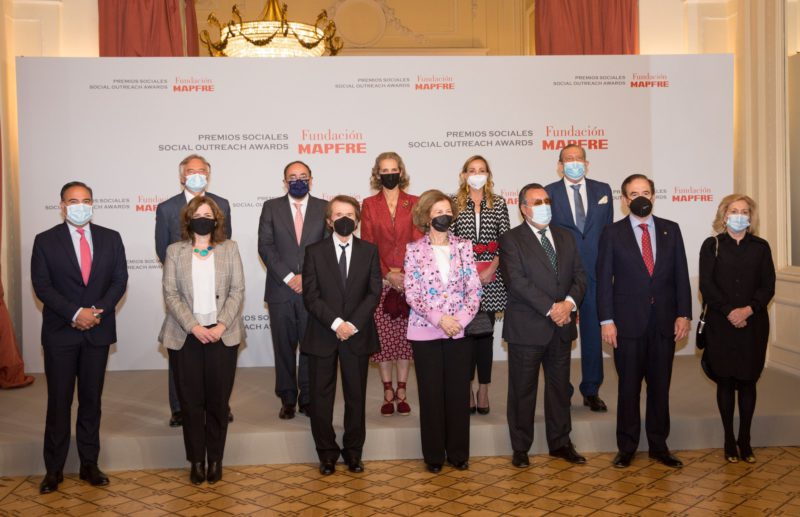 Fundación MAPFRE has presented its social awards in Madrid, whose objective is to recognize the commitment, generosity and solidarity of people and institutions that have carried out outstanding actions for the benefit of society in the scientific, cultural and social fields.

The event was chaired by the Queen Sofia and has had the presence of Milagros Paniagua, General Secretary for Inclusion and Social Welfare Objectives and Policies.

At the awards ceremony, Antonio Huertas, president of Fundación MAPFRE, has congratulated the winners for contributing to “reduce inclusion gaps, help those most in need in society and save lives on numerous occasions”. Also for “promoting actions that accompany, integrate, care, promote knowledge and offer opportunities.”

In this sense, he emphasized the importance that “we must all take action, take the example of the winners and find the way to move towards that more social, fairer, inclusive and supportive world where we want to live and leave the next generations. Together we are all better off ”, highlighted the president of Fundación MAPFRE, an entity that for more than two decades has recognized“ people and institutions that do not advance alone, but thinking of and for others ”.

The singer Raphael, committed to culture and society, has received this distinction for a whole professional career linked to his most human and supportive side, starring in an active commitment to one of the most invisible social problems for society, homeless”.

Raphael, (Linares, Jaén 1943), has the Messengers of Peace symbol, “the dove”, which Father Ángel gave him in recognition of all those years of collaboration. In 2020, he traveled to Rome to sponsor, together with his wife, the recently opened dormitory for the “homeless” in the church of San Francisco.

During his speech, the artist thanked, very moved, this recognition, “which completes a very special year for me, in which we are celebrating together 60 years of music on stage, a life dedicated to music in which I was always very aware of the importance of taking advantage of my microphone not only to sing, but to address issues that would make us dialogue and move towards a more just world ”.

“This is how I feel it should be, stressed the singer, who has indicated that social awareness and commitment to the common good should be present in each of our actions, especially of those who have a privileged situation to help” .

The success of three projects

In the edition of these awards, whose global endowment is 120,000 euros, Fundación MAPFRE has received a total of 1,219 applications, from Europe, the United States, Latin America, Africa and Asia.

Out of all of them, the following have been awarded: Project ‘360º Social Development Model’, carried out by the Juanfe Foundation (Colombia), which has received the Award for the Best Project for its Social Impact; Grupo Social ONCE (Spain), which has received the Best Entity Award for its Social Career; and the expert in law and insurance Abel Veiga, doctor from the Universidad Pontificia de Comillas (Spain), who has received the 10th Julio Castelo Matrán International Insurance Award. This international award recognizes scientific work and innovative projects that help to extend the insurance activity in society and promote economic stability and solidarity through insurance and social welfare.

A future for teenage mothers

Catalina Escobar, founder and president of the Juanfe Foundation, has collected the Award for the Best Project for its Social Impact, for the initiative, ‘360º Model of social development’, with which it helps adolescent mothers without resources from countries such as Colombia, Chile, Panama, to become self-sufficient women by through programs that help improve their mental and physical health, promote education in rights and values, and provide training for their inclusion in the labor market. The ultimate goal is to integrate them into society so that they escape poverty and have opportunities, not only for themselves but also for their families.

20 years ago, Catalina Escobar (Bogotá, 1962) She started this work in her country, where one in five mothers is between 15 and 19 years old. Since then, this social entity, which also works successfully in Spain, has cared for 2,000 minors and has made it easier for 2,500 teenage mothers to find work.

The president of Fundación Juanfe moved those attending the event with the story of Daniela Martínez, a pregnant teenager whom this entity rescued from a certain future and that thanks to the foundation next year he will obtain a degree in International Business Administration.

“It is not only Daniela, it is Dina, Xiomara, María Helena, Valentina, Yamile, a total of 245,000 people whose lives we have changed,” she pointed out during her speech, in which she revealed that teenage pregnancy is the “greatest spiral of poverty” in your country, and that “behind the pregnancy of a young woman living in poverty there are high rates of suicide, deep pain from sexual abuse, prostitution, drugs and racism.” “We will always represent women and children, he said, because we know that without them and without their dignity we will not have a country with true economic sustainability.”

Labor inclusion for people with disabilities

MAPFRE Foundation It has also recognized the work of the ONCE Social Group (Award for the Best Entity Award for its Social Career), an institution that, since its creation in 1938, has taken giant steps in the inclusion of blind people and people with other disabilities. disability.

Miguel Carballeda, president of the ONCE Social Group, who has collected the award, has been very satisfied with this award, “to our social trajectory which is like saying to our history of more than 82 years, for and by people with disabilities”. In this sense, he has also stressed that “recognitions such as that of the MAPFRE Foundation They make us maintain and strengthen even more if possible, our illusion ”, an illusion and an effort, he has indicated, that the ONCE has maintained during the pandemic to reach all blind people and, especially, the 11,000 over 55 years blind who currently live alone.

“We listen to them and cover their needs, as with the rest of the 71,000 blind people affiliated with the ONCE and with our ONCE Foundation, which helps many people with disabilities, in collaboration with an incredible team of volunteers ”, he indicated.

The organization, which is one of the most reputable companies in Spain, has developed a model organizational success, based on the solidarity that generates wealth and that offers the opportunity to have a decent job and economic independence for millions of people with disabilities, an aspect that this institution considers fundamental for their social inclusion. In the last decade, Grupo Social ONCE, which currently employs more than 71,000 workers, 58% people with disabilities, has been able to create 22 daily jobs thanks to the popularity of its lottery products, its main source from income.

The teacher Abel Veiga, doctor and professor of Insurance Law and Commercial Law at the Universidad Pontificia Comillas (Spain) has received the 10th Julio Castelo Matrán International Insurance Award for his work ‘Insurance and Technology. The impact of digitization on the insurance contract ‘.

In his research, the author assures that new technologies are revolutionizing the design of the insurance contract, as well as the way of marketing and distributing it, and are doing so with a strong competitive spirit between insurers and distributors. It also highlights that insurance is currently in the middle of a transition, and also facing an enormous challenge, which consists of adapting, with new rules in the regulatory framework, to a new scenario that has emerged as a result of companies, mainly the financial ones, they are breaking in with new forms, lower costs and with a wide knowledge of consumer needs.

During his speech, he stressed that researchers and teachers must work for understanding, “knowing that legitimate disagreement brings us closer to commitment, to the meeting point that is none other than working and giving the best of ourselves to knowledge and our social environment”. In this sense, he has also wanted to value the work of the teacher. “There may be other professions just as beautiful, but none more beautiful than something that is simply a pure vocation, a vocation for service, improvement and a mark. That’s the great reward and we don’t need more”, Has indicated.