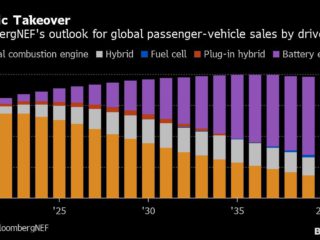 (Bloomberg) – Group of Seven leaders are discussing ambitious plans to shift car purchases away from gasoline and toward greener vehicles by the end of the decade, as part of a package of measures to combat the climate change.

According to a proposal contained in a document seen by Bloomberg, the G7 governments would “strive” to ensure that the majority of all new passenger car sales are not gasoline or diesel “by 2030 or sooner.” Countries are divided on how specific the measures should be.

The seven national leaders gathered for their summit in Cornwall, south-west England, also want to pledge more funds to help the developing world cut carbon emissions, although details on amounts are unclear.

The commitments have yet to be agreed upon by the G7 officials who are drafting the conclusions of this weekend’s summit. But setting a goal of moving away from gasoline could represent a turning point in efforts to reduce global oil consumption and greenhouse gas emissions.

With the summit a day away, the plans are still in draft form and it is also unclear that leaders, including US President Joe Biden, will back the proposed wording that is to move away from polluting cars.

A US official declined to confirm whether the White House supports the wording under discussion.

The official said Biden believes in strong investment in the electric vehicle markets and supply as a way to address climate change and create jobs. But the US domestic plan does not go so far as to require a ban on combustion engine cars.

The largest US automakers have recently set targets for greener vehicle production. General Motors Co. announced in January that it aims to phase out emissions from new light-duty vehicles by 2035. Last month, Ford Motor Co. pledged that four out of 10 vehicles Ford sells would run on batteries by 2030.

New electric car sales will reach 34% of the global total by 2030 and 68% by 2040, assuming no more political incentives from governments, according to BNEF forecasts.